The Dirty Nil are fucking awesome

If you ask anyone why they like The Dirty  Nil you will hear words like: fun, badass, awesome, kickass, loud, great. Those descriptors are accurate.
The Dirty Nil have been around for a while and  in the past few years they have blown up in Hamilton in an amazing way. Suddenly everyone knows about them, and loves them.  This is partly because they are very nice and funny – and partly it is because their music is awesome.

No nonsense, up beat, loud, and fun. You know? The way music should be, without pretense and posturing. The Dirty Nil pack clubs and were recently  invited to play a number of Ontario dates with Hamilton heavy hitters, Monster Truck.

I caught up with Dave Nardi for a chat to learn more about the band.

Q – For the uninitiated, can you please tell us how you guys got together?
We met in high school, at Highland. Luke and Kyle were in a band and I was their biggest fan. I went to all of the shows and eventually when their third member left – I joined! We’ve been together for about 6 years.

Q – How does songwriting work in your band?
Luke writes most of our songs, but they all come together differently. Sometimes Luke will come to practice with a fully formed song that we will all work on. Other times the songs come together organically during practice – although it is mostly Luke that does our song writing.

Q – What is your pre-show ritual?
I usually go to the bathroom so that I don’t piss myself on stage. Then I get two beers to have with me during the set. We tend to have drink tickets, so it is usually the cheapest beer the bar has –  ’50’ most of the time. We used to go into the alley before shows and do vocal exercises to warm up – we don’t do that as much. Partly because we’ve gotten lazy.

Q – Or too good – so you don’t need to warm up anymore?
(laughs) Yes, it’s definitely that.  Basically most of the bands we are playing with these days are either our friends, or a good band, that’s usually one in the same. We want to see the shows – so we’ve given up warming up for our own set. 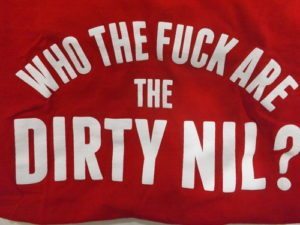 Q – The Dirty Nil is so loved in Hamilton. When I ask people about their favourite local acts you guys get mentioned a lot.  What has the reception been like outside of Hamilton?
It has been really positive. We play a lot in Toronto because we have a lot of friends there. Actually, most of our friends are in bands so we go to their shows and they go to our shows. It’s great. We also play a lot in St. Catharines – that has become our second, Hamilton. We have a lot of friends in bands there and the music scene is so supportive.

We recently released a ‘split ‘7’‘ with our friends from St. Catharines, Northern Primitive. That town has been great to us.

Outside from Hamilton – Toronto – St. Catharines has been a bit trickier. We have played shows in cities like Peterborough, Kingston, and Ottawa, the turnout isn’t always the greatest but the people who come are really excited to be there. That’s been our experience – the people who listen to us tend to love us, and we like it that way. I don’t like the idea of fans who ‘kind of ‘ like you. Either you love us, or you don’t. I think it is just a matter of promotions and getting our name out to more towns.

Q – What do you like to listen to?
Well like I said, most of our favourite bands are our friends’ bands. Bands like Elk and Northern Primitive, from St. Catharines. I love bands like Grays, and Single Mothers. I’m into stuff like Fugazi, anything with Ian MacKaye. I like a lot of the classics.

Q – Well, Mötley Crüe is coming to Hamilton in May. How do you feel about that? Does it change your plans a little bit?
What? Wow. That is incredible.

Q – I was reading an interview you guys did with BlogTO and I saw a really funny and hateful comment left on that article that I wanted to run by you.  Here is your chance to respond to internet trolls – what do you say about this?

I’m not even sure how to begin to address that.  I guess, thank you?

Seems to me like if you are the opposite of an acoustic guitar playing ‘Waving Flag’, then life isn’t too bad?

Yeah.  We are the exact opposite of acoustic guitars playing Waving Flag, and Midway state! That’s the best compliment you could ever give me. Thanks! “Dirty Nil: Not the Midway State”.