The Dirty Nil and The Flatliners Interview Each Other

The Dirty Nil and The Flatliners are embarking on a tour (with Sam Coffey) this summer. It’s the stuff of every band’s dreams – touring with your friends. Both The Dirty Nil and The Flatliners are terrific bands who have been interviewed on Cut From Steel in the past and so we thought it might be interesting to step away and see what kinds of questions the bands would ask each other. The guys did not disappoint.

Catch the Hamilton show tonight (May 25th) at Absinthe. Friday (May26th) in London at the London Music Hall
The rest of the show details are here.

The Flatliners interview The Dirty Nil

Q – There aren’t many bands out there that are as powerful of a live band as the Nil. When you guys were growing up, who were some of the first musicians to really inspire you to follow this path? And why do you think you connected to those particular artists?

Kyle: When we first started playing we were really into bands like Led Zeppelin and the Who. I remember Luke and would sit and obsessively watch live videos of them and countless other bands thinking, this is what we want to do. I want to play loud and hard and fast to as many people as possible. Those bands were larger than life and embodied to us what rock and roll music is. I personally just loved everything about the way they played, especially players like Bonham and Keith Moon who were masters of the kit in their own ways. I feel hopelessly in love with what they did.

Q – Congrats on the Juno boys! A big win for a more-than-deserving band. Walk us through the moment that they called your name as the winners, what it means to you today, and what Luke meant when he said “weed rocks”?

Luke: Well honestly it was a pretty nice moment but all I could think was, “I really hope they’re bringing more chocolate soufflé to the table“. As for my closing remarks, I am the lord’s instrument. He speaks through me and I deliver his message to the children. 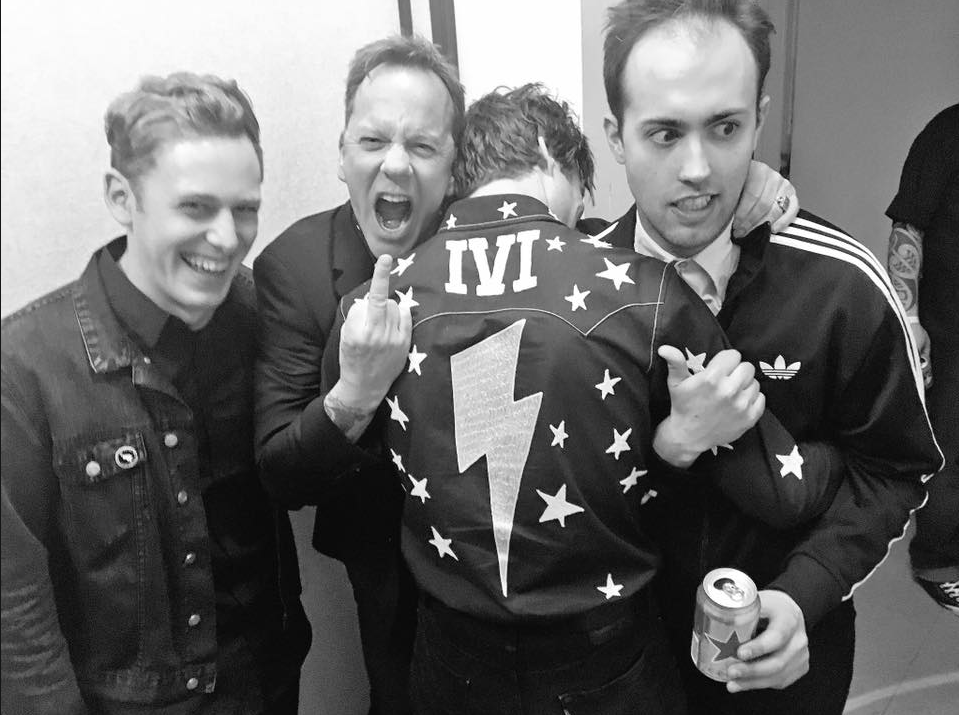 Q – What was it like hanging out with the man, the myth, the legend Kiefer Sutherland? Follow up question: When can we expect a Nil song featuring Big Kief?

Kyle: Luke came up to me and said “Fucking Kiefer Sutherland is over there,” and there he was. He recognized Luke and stopped to talk to us a bit. I am still kicking myself for forgetting to tell him how much Young Guns rules.

Q – Where can I get shiny space pants like the ones Luke has? Also, do you think he’d mind if I got some too?

Luke: And the lord said: “through Ebay, anything is possible”. The working title for our new album is “Silver pants from China (please don’t give me cancer)“. And bud, we need more spacemen, suit up.

Q – Do you think Gene wears khakis or corduroys?

Luke: Buddy, he gets the best of both worlds. Khaki pants and corduroy jacket.

The Dirty Nil interview The Flatliners

Q – You guys just got back from Brazil so what the fuck was that like? South America must be pretty sweet.

Chris: Our trip to Brazil was short, but nothing short of incredible. For so many years now, we’ve been overwhelmed with our fans there telling us to “Come to Brazil”. To kick it off alongside Rob Zombie, Slayer, Ghost, Prophets of Rage and Rise Against kinda made us look like softies – but god damn did we have a blast! To look out into the crowd at that festival and see people singing along to new songs and old songs alike was a really powerful thing. Just wait til the Nil gets there and blows brains everywhere!

Q – You guys have been at the touring game a lot longer than we have and have been many places we have not. What’s one or some of the places left you want to play in the world? or even…space?

Chris: We’re hopeful that this whole music thing pans out well enough that we can pay a space scientist (that’s a thing right?) to find a big and strong enough ice particle in the rings of Saturn for us to play a show on. If that never happens, then I’ll consider these last fifteen years a huge waste of time…. But reeeeeally, I’d really to play in South Africa someday. For as much ground as we’ve covered in our day, there’s a lot of uncharted territory for us. Let’s just spin the globe and see where we’ll end up!

Q – Which one of you can out party all the other guys if you went head to head?

Chris: If we’re talking classic drinking games, Scott and I may be in a dead-heat for a good while, neck and neck and twirly eyed. But I think he might take that cake eventually, on account of me getting sleepy when I marathon-drink these days. If we’re talking about the devil’s lettuce, Paul and Jon can fill a room with smoke so quick and thick that they wouldn’t even know the other guy was still there.

Q – Which one of us is going to die on this Canadian tour?

Chris: Hopefully none of us, because safety first AMIRIGHT?! But in actuality, we all die eventually so let’s have some fun. Grim enough for ya?!