Talking about the Creative Process with Beams

Toronto based indie folk/country band, Beams, are releasing a new album on February 23rd and you really ought to hear it. “Teach Me To Love” is a lush and beautifully produced album about internal struggles and the melancholy around us. The album is a joy to listen to from front to end is a great mature piece of work from this multifaceted band. You may imagine that an album from a 7 person ‘art country’ band (Anna Mernieks, Keith Hamilton, David Hamilton, Heather Mazhar, Mike Duffield, Craig Moffatt, Martin Crawford) may sound busy, over the top and self-indulgent. That couldn’t be further from the truth – I’m not sure how they fit in all of the creative minds and all of the many instruments (even an un-ironic banjo) but the music sounds expertly edited and produced. The album sounds mature and self-restrained and like it comes from musicians who have mastered their craft and and are self assured. We caught up with Beams‘ principle song writer Anna Mernieks to talk about song writing, the creative process, and this great new album.

You can catch Beams promoting their new album in Hamilton at This Ain’t Hollywood on Feb 21st, Guelph at eBar on Feb 22nd, Toronto on February 23rd at Smiling Buddha.


Q – Congratulations on a fantastic album! I’ve really enjoyed listening to it. Can you tell me a little about how this album came together?

Sure! So, I did some traveling in spring 2014 and kept a journal while I traveled, mostly stream-of-consciousness type stuff, which I took with me when I went to work in the woods for the summer. I had a lot of downtime out there so I worked some of the poems into songs and came up with a few more throughout the year. To arrange them with the rest of the band, I workshopped them first with bass and drums to set the overall tone, tempo etc, and then we painstakingly fit everyone else in, trying our best to make sure that no one’s parts stepped on the toes of anyone else’s parts. We were kind of taking our time with it until we found out that we got funding for the album and, given the deadlines attached to that process, we sped up production so that we could record it in winter 2015/2016. Most of the recording was done at Union Sound Company, a great studio in Toronto. It was engineered and mixed by Ian Gomes, assisted by Alex Gamble, and then it was mastered by Peter J Moore at the E Room. We sat on it for a while hoping that we’d get a label to help us release it, but finally we just decided to release it ourselves under our own label, “Be My Sibling”.

Q – I understand that this album came on the heels of some personal mental health struggles. As an artist how do you navigate how much of your personal life you share and how you use your public voice?

It really did! I wasn’t sure this album would ever see the light of day. As an artist, and in general I’m pretty open about my life with the mentality that many people silently struggle with the same type of things as I do but are not able to talk about them. Maybe knowing that they’re not alone could offer some comfort. I see having a microphone in front of me as a privilege and a bit of a responsibility. I draw the line at sharing anything that could hurt someone or their reputation.

Q – “Berlin, Teach Me To Love” is one of my favourite tracks form the album. Can you tell us a little about what inspired this song?

Thanks! Well, it’s based on some of those stream-of-consciousness writings that I was mentioning before, ones that I jotted down after visiting Checkpoint Charlie and a few communist museums and sites in Czech Republic and Latvia. I was also reading a book called the Iron Curtain at the time, by Anne Applebaum, and you know, the horrors of Nazi Germany are fairly well described in our Western common knowledge, but the horrors of Stalinist and Leninist communism were unknown and surprising to me. So I was reading about and traveling to these places where it all played out, feeling quite empathetic, and just thinking – what would I do if suddenly there was a wall splitting Toronto in two? Reading stories about people who risked their lives to sneak others across the checkpoint back to their loved ones, or to relative safety, for whatever reason – the humanity that persevered during the time of the wall and that finally caused it to come down resonated with me and I asked myself: would I be able to find that courage? Can I love anyone enough to take those risks? For most of my life I’ve been quite distrustful of people, always ready with a backup plan or a foot out the door just in case things turned sour. So, in this song I’m pleading for that humanity and strength that I felt in Berlin to enter into my being and help me to love with courage. 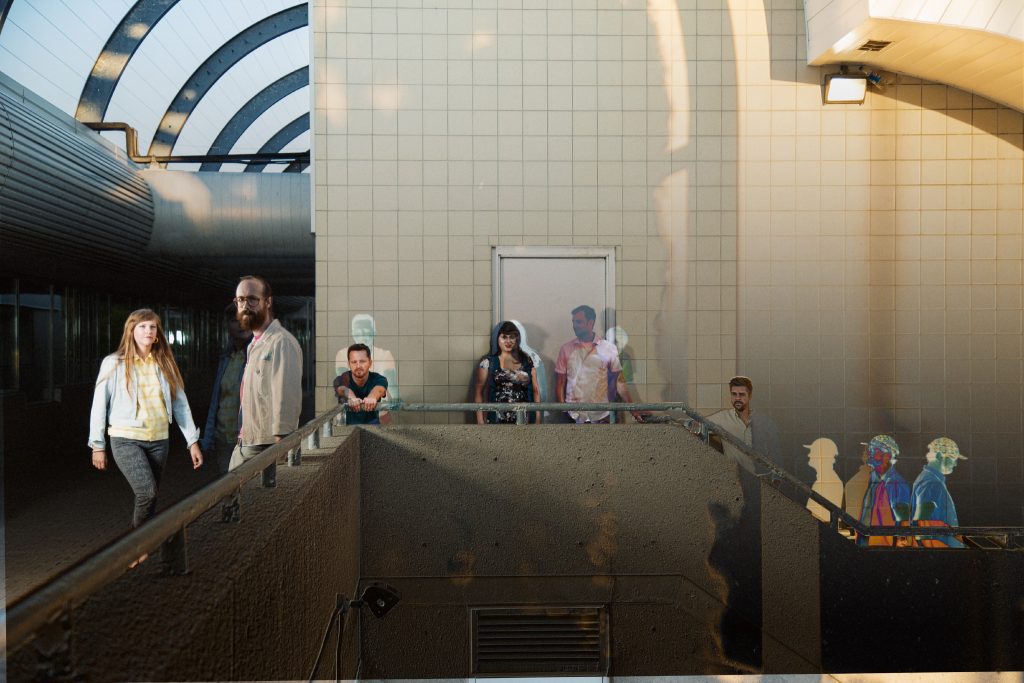 Q – How do you (as a band) creatively balance all of the arrangements – instruments, sounds, and people required to produce music like yours? It seems to me that this could all quickly become ‘too much’ of everything and yet somehow you have enough restraint and editing to make it sound intentional and balanced.

It’s tough, for sure. People come to the table with parts that often end up being boiled down to the bare, bare essentials, or totally reworked so that they gel better, but it’s the only way to make it come out in a way that isn’t chaotic. We have a bit of a process of building it up from the banjo, vocals, bass and drums and then adding instruments where they make sense – mandolin to riff off of the banjo lines, guitar to add some grit, vibraphone to brighten up some melodies, saw or lap steel to add some ethereal vibes. The most successful writing process is the one where people understand what their instrument’s role is in the music.

We are releasing our second full-length album Teach Me to Love on vinyl and CD on February 23rd, with a couple of sneak-pre-release shows – one in Hamilton at This Ain’t Hollywood on Feb 21st, and then in Guelph at eBar on Feb 22nd! After the album is out, we’re going to go on tour in the States, including SXSW and Valley of the Vapors, and then do a bit more touring in April and May. I guess we’ll see where that leads us! We are just pouring everything we have into this release. I’ve got a lot more songs in the can, so maybe we’ll do a bit of writing after this release cycle is done.

Thanks a lot, Anna!