As a music lover who grew up in Hamilton, I was (and still am) obviously a huge Alexisonfire fan.  The influence of the band can be felt in a lot of newer and younger punk bands, but a definite void was left when they quit. Skip ahead a few years and suddenly something called “Dead Tired” appeared on social media. There was word that George Pettit had a new band in the works and they were planning their first ever show before a single track was available online. The excitement was huge and the show was amazing. Dead Tired is a lot more than “George Pettit’s new post-Alexis” band, this new band is full of incredible talent that stands on its own without any comparisons necessary.  Along with George Pettit, we’ve got: Franz Stefanik (Okey Doke Tatoo), Chris Whetstone (Bird Rentals), Mike “Biff” Young (Shallow North Dakota), and Phil Waring (Black Lungs) – that’s a lot of talent in one band.

Cut From Steel was present at Riot Fest in Toronto last weekend and seeing Dead Tired whip the crowd into a frenzy was an absolute highlight of the two day festival. The energy coming from the stage once Dead Tired began was incredible. Dead Tired are one of our top pics for Supercrawl this weekend and it is highly recommended that you get nice and close to the stage.

Q – First off, congratulations on all of the great reviews and excitement surrounding Dead Tired. I think it is safe to say that music fans have been waiting for something like this for a while and could not be more thrilled to get a copy of your upcoming album into their paws. What has this experience been like from your point of view?
At first it was flattering that people were interested. I think it definitely was in the back of our minds when we were making the record. Kind of like, “oh shit now we have to deliver.” We went in to Box Car with the intention of banging out a punk record in a weekend. Shortly after we decided that was a bad idea and ended up working a lot harder on it, doing overdubs, doubling vocals tracks etc. I think the interest in the bad was the driving factor in us giving the record more attention. Hype is fun but tough to manage at times. It’s a delicate balance of keeping people interested without annoying them. We could have been a little more organized with the unfurling of information.

Q –  Each member of your band has had some kind of an impressive musical background, has it gotten any easier to write and arrange tracks as compared to when you were starting out?
The record came together exceptionally quickly. I think we had 14 songs in under 3 months. There was an instant chemistry when the band got together which lead to practicing 2-3 times a week. So I guess it has been pretty easy writing. I mean the songs aren’t exactly rocket surgery and it’s not like we are gunning for radio or headlining the ACC so we are free to do what ever we feel like. Feeling free to do what you want is a good place to write from. 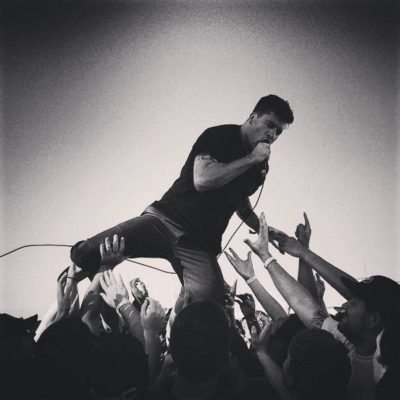 Q –  I was at Riotfest this past weekend and I caught your set, you were amazing  and the crowd was freaking out the entire time. The energy was really cool. I think Die Antwoord was still on at the closest stage but you managed to be so much louder and more explosive than whatever was going on back there. What was your experience like playing that festival?
Die Antwoord played right before us. Our set over lapped with Stars. That was really the only pitfall of the festival. Rebel stage and rock stage were at odds with each other. You didn’t feel it when you were playing but you could notice it a bit between songs. Either way, sorry to Stars if we were a distraction.

The show was a lot of fun. It really lit a fire under the band. It was like a test to see how well we could play under pressure. I think was a pretty important show considering it was the first time that a lot of people were seeing us. I have always loved playing the side stages at festivals because it’s a bit of an up hill struggle. It doesn’t come with the massive captive audience at main stage. You have to convince people that you are worth watching. I think we did that.

Q – I thought it was very cool that you guys reminded the crowd to stick around for Pup after your set; it was nice to see the support for a younger punk band. What other punk bands in the GTA / Hamilton region are you guys into these days?
Pup were supposed to play on the Saturday but for some reason they couldn’t make it so they ended up playing after us on the Sunday. I can sympathize with a band down on it’s luck and people aren’t always the most attentive when it comes to schedule changes at festivals so I gave them a little shout out. To tell you the truth I’m not entirely familiar with their music outside of their music videos but they seem like a nice group of guys and I enjoy watching their music videos.

As for Canadian punk, there’s always lots of exciting bands. Currently I’m pretty into Strange Attractor, Born Wrong, Wrong Hole, VCR, TV Freaks, S.H.I.T., Teenanger. That’s not even the tip of the ice burg though. I’m forgetting a bunch of great bands. There’s a lot going on right now as far as can con goes. 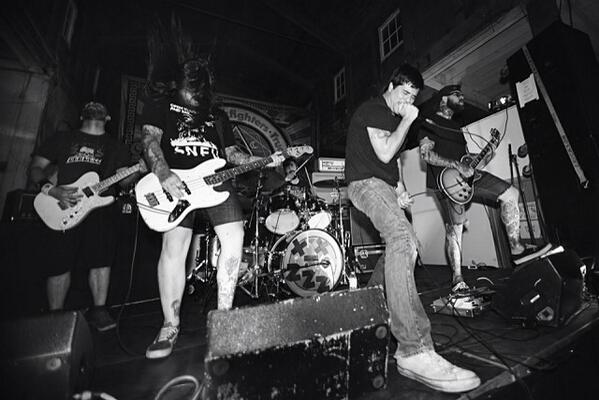 Q –  George – how do you maintain your voice and your vocal chords after delivering those ferocious vocals?
I don’t.

Q –  What’s the best thing your parents listened to when you were growing up?
My parents were academics in the 60’s so they kind of missed out on all the sex, drugs and rock and roll stuff. I remember they listened to a lot of 50’s doowopy kind of stuff. I think the best thing my parents were into was Roy Orbison. Still love that guy. You can take every Elvis record on the planet and fire it in to the sun for all I care just gimme some Roy.

Q – When can we expect an album / EP / mixtape..etc  from you guys?
Hmmm, well the record is being mastered next week. Hopefully by Halloween….realistically, Christmas.

Q – Who are you looking forward to seeing at Supecrawl?
Bry Webb for sure. Wtchs, Dirty nil, Dinner Bells, Tongue Fu, Teenage head. I feel like the locals rule the festival this year. Maybe that’s true every year though.

Thanks a lot, George!