An Interview with Heavy Hearts

First off, I’m from Elora, Ontario. It’s not exactly Niagara, where Heavy Hearts call home, but it does have one thing in common: tourists. Tourists mean that whatever job you get, it’ll probably involve catering to people who aren’t from your town. Which becomes a bit of a pain in the ass when you start to clue in that most of the people you’re talking to you just see you as a prop in some idyllic scene that they’re checking out for the weekend. You spend your high school playing music, dodging tourists, and looking for places to cause trouble. Things don’t get much better years later when you’re trying to think about how to get your life together and your Facebook feed is filled with kids going on trips to Greece and getting awesome jobs. You’re more worried about getting your band together so you can make a little something more out of the thing you love.

Bands like Heavy Hearts are familiar with this kind of small town pain, and frankly, every other type of pain there is. Singer and guitarist Justin Glatt writes a style of music that the band has dubbed “Sadcore”, giving us good emo songwriting and great metal thrashing. It’s pure teen angst. These guys are still pretty young, but with their second EP about to be released, you’re listening to a band that’s starting to mature. Somewhere, A While Ago is a collection of four songs that take you to a place a lot of us have been: lost, afraid, angry, and looking for something that can just set us free. With the band currently playing shows all over Ontario, there’s a good chance these heavy heartbreakers are gonna be coming to your town.

Q – This is your second record on Indoor Shoes. Would you say you’ve grown as a band since? How?
Our first EP, Jacoba was us trying to find our sound. The songs on that release were all over the place and didn’t really make sense together. The songs on our upcoming EP, Somewhere, A While Ago flow much better as a cohesive release. This new EP is us finding our sound.

Q – Considering you call yourself “Sadcore”, your songs definitely have some Emo elements. What do you find drives you to create music?
A lot of the content involved in our songwriting stems from us living in a small town. We’ve seen a lot of our longtime friends leave and never come back again. The feeling of stagnancy is definitely something that inspires a lot of the themes in our music.

Q – Jamie, I understand you spent some time living in Nashville. How did that happen? Do you feel like that influenced your songwriting at all?
I moved up to Nashville to start living with a friend in a commune type area. I didn’t play a lot of music during my time there, but the music I did play wasn’t really anything I would normally play. So, if anything, it might have given me more discipline in my writing. 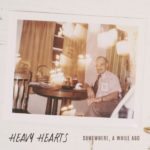 Q – What’s the story on the cover of Somewhere A While Ago? Is that one of your dads?
Originally we had the idea of making the artwork fit a postcard sort of vibe. We went through a bunch of old photos in Justin’s garage and found this one. It’s a family friend to his grandparents.

Q – Where did you guys record SAWA? Did that have any effect on the final product?
We recorded SAWA with Sam Guaiana in Caledon, Ontario at King St. Studios. Sam brought in a bunch of ideas involving ways to layer the songs both vocally and instrumentally that shaped the outcome greatly.

Q – Justin, I can tell that you put a lot of effort in crafting songs. Are there any lyricists or songwriters that you try to emulate? Who would you most like to say to you: “That’s a good song”?
I try not to emulate any other lyricists while writing a song, I mostly just try and get whatever I’m feeling on paper. I do however really admire Andy Hull’s (Manchester Orchestra) lyrics. So I guess him saying [that] he liked one of our songs would be pretty sweet.

Q – Who’s idea was it to do the album teasers for SAWA? Do they play into the idea of the record as a whole?
The idea for videos was Jamie’s idea. We slowed down the recording of Garden Arm a bunch of times and recorded 10 short videos with segments of the song playing behind them. The videos don’t really play into the record at all. They were just a way for us to try and get people’s interest before the single even came out.

Q – To me, nothing says southern Ontario quite like “all ages hardcore show”. What are some of your memories growing up around the Niagara / St. Catherine’s scene?
Being able to have the St. Catharines music scene in our back yard meant that we started going out to shows at a young age. Venues like Red Square and L3 seemed to have shows booked all the time and being able to see bands like Alexisonfire, Attack In Black and The Gorgeous play those venues is something that has definitely effected our lives now.

Q – You’re touring around Ontario and Quebec till early march. Any plans for the summer?
We’d like to book a couple tours out in the states, and then start working toward recording a full length.

Thanks and good luck to you guys!