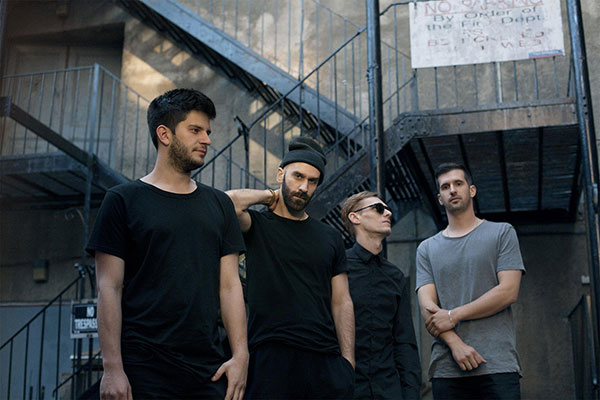 X Ambassadors are an excellent pop / r’nb / indie rock band that is responsible for the infectious tune, Unconsolable  that’s been played everywhere this spring/ summer. X Ambassadors are:  Brothers, Sam (vocals, guitar), and Casey Harris (keyboard), with friends: Noah Feldshuh (guitar), and Adam Levin (drums). Originally from upstate New York, these guys dropped everything to move to Brooklyn to pursue their musical dreams. It didn’t take long for X Ambassadors to land a record deal, huge producers, and vocal fans.

X Ambassadors are a great band, taking elements of pop, r’n’b, and rock and making it all sound fresh, and somehow new. Other bands have combined these genres in the past, but X Ambassadors do it flawlessly. There is a reason I’ve had their brand new EP  Love Songs Drug Songs on repeat , since it was released. There is no doubt that X Ambassadors will become huge; the shows on their current tour have been packed and the reviews have been excellent.

I caught up with vocalist, and guitarist, Sam Harris, to learn more about the band.

Q –  How is your tour going?
Tour’s been great. The shows have all been going so well- we loved touring with Jimmy Eat World for a couple weeks and it feels good to be back on the road with the Imagine Dragons dudes again, too. Unfortunately, outside of the shows we’ve also had a bit of an unlucky month. Our van broke down three separate times this month which forced us to cancel two shows, during which Casey was fighting off a nasty sinus/ear infection that took us in and out of three different hospitals and forced us to cancel two more shows. Ever since we’ve been a band we’ve been hearing horror stories from the road, so it’s not like this type of stuff doesn’t happen. But it still sucks.

Q – Listening to your music, it is easy to imagine scenes from films, or even scenes from my own life flashing by. What is it about your music that evokes such imagery and emotions? Do you create it with that in mind, or is that just a byproduct of your music in general?
It’s kind of funny you say that. Casey and I grew up with movies in our blood;  our dad has been working in the film business for the past 30 years, so some of the first music we were ever exposed to were film scores. The soundtrack to Cinema Paradiso sticks out, as does the music from Dumbo. We’re also really big musical theater geeks in my family, so the first CD I ever fell in love with was the Phantom of the Opera soundtrack.  All of this I’m sure comes out subconsciously in the music we make.

Q –  Unconsolable is such a beautiful song, both the acoustic and radio versions are phenomenal. Congratulations on it being such a success. Can you tell me a bit about how that song came together. What inspired it?
Unconsolable started off in the most organic way possible. We were sitting in Noah’s disgusting little one-room apartment late at night, listening to this crazy reverse-guitar loop he had created; I had these lyrics, “I hope we stay/ thick as thieves/ butter and bread/ pillars of colonial homes”, and I just started singing them over the loop. Then I came up with the chorus “and you say you are/ unconsolable” which I remember Noah saying was his favorite thing I had written yet. I didn’t really think much of it myself at the time. I realized much later the line came from a conversation I’d had with someone; maybe an ex-girlfriend. I vaguely remembered arguing about the pronunciation of the word, whether it was “inconsolable” or “unconsolable”; later we looked it up and apparently they’re interchangeable. Regardless, it was one of those theres-nothing-you-or-anyone-else-can-do-to-help-me-with-this conversations. My whole life, I’ve always been driven crazy by people who take their lives too seriously.  I think I’m a very empathetic person and I tend to get wrapped up in other people’s bullshit. I always try to make them see how petty their problems are in the grand scheme of things, but it never seems to work. Everyone’s got their shit to work out, and most of the time they gotta figure it out on their own.

Q – Have you ever written a song with personal lyrics taken out of your lives, and then had the person who inspired the lyrics (ex-partners/old friends, etc) question you about it once the song was released?
I try to be subtle, but who knows. No one has come out of the woodwork and said anything to me yet, but I’m sure that if they listened to the songs they’ll know what they’re about. Girls are especially perceptive about these things, they always know everything.


Q –  You guys have a great sound. To me, it seems to have bits of pop, r’n’b, blues, and some indie rock – – yet somehow it sounds fresh and new. How did you arrive at this sound?
We’ve always been a rock band that’s heavily influenced by hip-hop and r&b. To be honest, none of us listen to all that much other than hip-hop and r&b. We grew up on The Fugees, Tribe, De La, Biggie, Blackstar, Blackstreet, Jagged Edge, 112, Aaliyah, TLC, Destiny’s Child, Missy Elliott and Timbo, all that classic shit. That was the first type of music we were ever exposed to that our parents told us NOT to listen to, so you can imagine it made quite an impact.  Later on, we all fell back in love with rock and pop music, but there are so many of those bands the list is endless. There was never a real plan of how we were going to go about crafting our sound, but we always knew we wanted to write smart, catchy pop songs that had heavy, ass-shaking beats. Hopefully we’ve achieved something along those lines.

Q –  If you could go back and write the soundtrack for any existing movie / tv show – – what would you chose?
The Brave Little Toaster Goes To Mars. That movie pales in comparison to the first one, soundtrack and all. As a matter of fact, we’d probably like to re-write the whole goddamn movie. The first Brave Little Toaster was so good, it’s a shame the second one sucked so hard.

Q –  What are you guys listening to these days? Do you have any track / artist recommendations for us to check out?
Check out Jamie N Commons. He’s gonna be a big part of Eminem’s new record and he just put out his own EP. He’s got this voice – it’s something else. He sounds like an old delta blues man trapped in the body of a young, white 24 year-old Englishman. Also, keep an eye on Avan Lava. Insanely good pop/dance group from Brooklyn. They’re going to be HUGE.

Q –  What’s better – – ODB’s Baby I Got Your Money, or R. Kelly’s Ignition Remix?
ODB, Baby. That song got me through so many middle school dances, you have no idea.