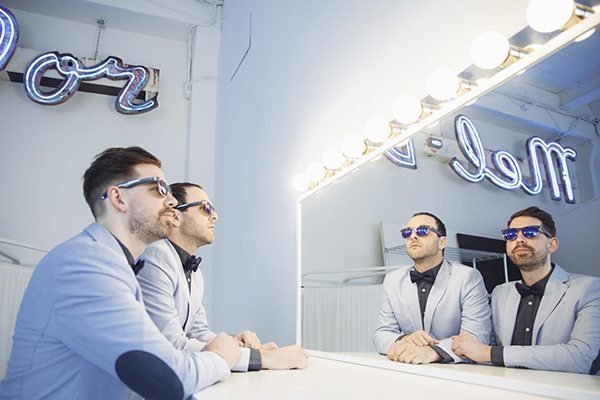 Hamilton / Toronto based Twin Within (Steve McKay and Alex Samaras) have been a wonderful addition to the local music scene since their debut earlier this year.  Twin Within stand out primarily because of their mesmerizing vocals and strong harmonies. You would be hard pressed to find two vocalists with the type of range and richness that these two have. Besides the amazing singing the musical accompaniment is impressive as well as Steve and Alex play a plethora of instruments. Their debut album, Horizontal Lines, is incredible.

Q –  We are really excited to have you play Supercrawl this year. What is the first thing that pops into your mind when you hear the word “HAMILTON”?
Steve: I’m from Hamilton, so my mind goes straight to a fuzzy, warm place and I think of my childhood home in Kirkendall.  That, and I think of George Hamilton, who donated the land for the first jail in the district of Gore and became our city’s namesake.
Alex: My mind goes straight to my friends Thom and Tavis. They were the reasons that I first started visiting Hamilton.

Q – Who are you looking forward to seeing at Supercrawl? (bands, artists, etc)
Steve: I’m excited to see Hayden the most.  I always associate Hayden with the “Everything I Long For” era, which was put out on Sonic Unyon.  Watching him play downtown on Sunday afternoon will be a thrill for 14-year old Steve.
Alex: SAME

Q –  Supercrawl is an arts festival and besides the awesome music, the festival has all sorts of visual artists showing their work. Do you dabble in any other arts besides music?
Steve: I dabble in the art of…nothing.  The answer is truly nothing – I think about music all the time.
Alex: I love crafting but I’m terrible at it. But that’s sort of the point. I also love taking pictures and weird videos that I think are cool in the moment and then later when I watch them they aren’t that cool.

Q – How would you compare playing a regular show to playing at a festival?
Steve:  The biggest difference between a regular show and a festival is usually the outdoors bit.  It’s a little disorienting at first, with the wind blowing and the crowd seeming so small and faraway.  Love it, though.
Alex: the audience is buzzing that little bit more at a festival and they are dedicated live music listeners!

Q –  If you could put on your music festival what would be on your ‘must have’ list? (Alternately: If you have been involved in putting together your own festival – what did you have that you were proud of?)
Steve: Other than music?  At Track & Field (a long defunct festival) they had little breaks in between the music.  The breaks didn’t happen on purpose, just due to logistical slowing and it created these little pockets of silence.  I would allow for silence….
Alex: an amazing host that plays games with the crowd in between sets and many different group activities!

Q –  If you could do a band/musician swap with another band/musician for a day and get to play their music at a live show – who would that be?
Steve: I hear that Slash & Axl have reconciled, so I’m going to say G‘n’R.
Alex: STEVIE WONDER/JANET JACKSON

Q –  In your opinion – what was the  ‘summer jam’ of 2015?
Steve: I think it’s fair to say it was “Never Will” by Terra Lightfoot.  My own personal summer jam has been “I Am The Cosmos” by Chris Bell, but that was released a LONG time ago.
Alex: SAME

Q –  What’s the best thing you did all summer?
Steve: African Lion Safari with my wife and son.  They have baby elephants there!
Alex: I got to work at a couple of music camps and it’s becoming my favourite place to be!

Q –  Where do you draw your musical inspiration from?
Steve: Mainly Simon & Garfunkel.  JUST KIDDING.  I love what Scott Walker was able to achieve as a pop icon AND artist.  We’re striving to walk the line, just like Scott did and that means drawing from Classical, Jazz, Afrobeat, you name it.  Although, S&G never hurt nobody.
Alex: Definitely Scotty. And crooners! We love crooning.

Q –  What is the last thing that crosses your mind before you get on stage?
Steve: Is the guitar still in tune?  Nothing worse than starting a show with an out-of-tune guitar…
Alex: everything and nothing. just trying to get the vibes flowing through your body.

Q –  What are you listening to lately? Can you recommend a track for us to check out?
Steve:  Already mentioned it as a personal summer jam – I Am The Cosmos, by Chris Bell.  Chris was the part of Big Star that I really like.  I’m pretty sure he was the magic ingredient that made #1 Record so great.
Alex: great track.

Q –  What do you have planned for the fall / winter, musically speaking?
Steve: We’ve got a few plans, including a small tour with Vox Metropolis, doing the whole Classical vs. Indie crossover thing.  You can expect to see a couple dates popping up in November around Ontario. Otherwise, it’s about writing some new songs.  I’ve got a bunch in the bank and Alex and I plan to sketch some out with his vocal group, GREX.  Probably start rolling that stuff out in 2016.