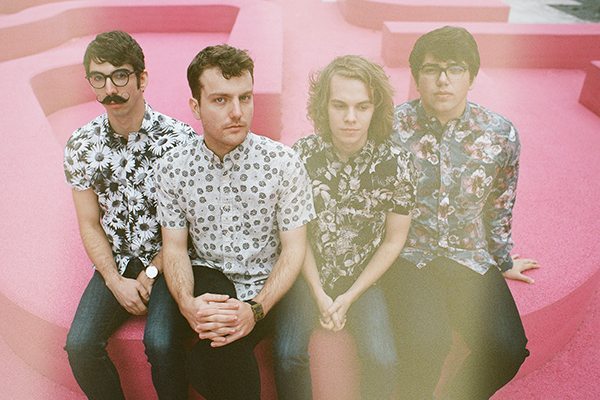 The Elwins are a great pop band from the lakeside town of Keswick, Ontario that specialize in writing bright infectious songs. They’re a group of guys that you would be happy to introduce to your friends and parents. The Elwins have a great taste in music and you can see lots of their worthwhile recommendations down below in the Q&A.

Q –  We are really excited to have you play Supercrawl this year. What is the first thing that pops into your mind when you hear the word “HAMILTON”?
Travis – The colour grey and kindness
Frankie – Trav’s Aunt Barb
Matthew – One way streets and Max Kerman saying, “Hamilton!”
Feurd – Hamilton keeps me warm

Q –  Supercrawl is an arts festival and besides the awesome music, the festival has all sorts of visual artists showing their work. Do you dabble in any other arts besides music?
T – I’d like to think my cooking is kind of “artsy” but I guess you’d have to taste it
F – I like to draw
M – I enjoy designing things on photoshop
F – Origami

Q – How would you compare playing a regular show to playing at a festival?
T – Catering is pretty awesome
F – I like that you get to play outdoors at festivals
M – It’s kind of like the difference between recess and summer camp
F – They often have more of a community vibe which is great. You get to spend a lot of time hanging out with the other bands and you get to discover a lot of new music!

Q –  If you could put on your music festival what would be on your ‘must have’ list? (Alternately: If you have been involved in putting together your own festival – what did you have that you were proud of?)
T – Mutiple kissing booths set up around the festival like a pub crawl
F – Loot bags, that would include a puppy (*the puppy wouldn’t be in the bag)
M – Friendship tent – it’s like speed dating but to meet friends
F – An impromptu dad-air-band late night set – someone will go around the festival choosing the best dads who will participate. We’ll do the classics, Stairway, Sweet Home Alabama and Bohemian Rhapsody.

Q –  If you could do a band/musician swap with another band/musician for a day and get to play their music at a live show – who would that be?
T – Cool question! Hmmmm….I’ll say Neil Hannon of The Divine Comedy
F – Paul McCartney’s drummer
M – Steven Drozd of The Flaming Lips
F – I’d switch with Dweezil Zappa in the Zappa Plays Zappa Band

Q –  What’s the best thing you did all summer?
T – Wrote songs
F – I got my G2
M – Went to Barcelona
F – Got the chance to chill with Jack Black at Sonic Boom Festival

Q –  Where do you draw your musical inspiration from?
T – Lately it’s been some words and jokes
F – Hearing a song I really enjoy always gets me fired up and makes me want to write more and continue to improve.
M – So many different things. Experiences, songs I’m digging, films. It’s always different.
F – Most recently I’ve been inspired by strong messages that I would like to convey through music. Things that I believe in and would stand behind. Musically it’s all over the place but a lot of modern pop music.

Q –  What is the last thing that crosses your mind before you get on stage?
T – Not sure
F – Do I have my glasses holders?
M –  I get this rush of aggressiveness and I’m like “LET’S KILL IT!”
F – Right before we play we like to do a huddle and someone takes the role of Dad and pumps everyone up. So usually when we go on stage I’m pretty in the zone from dad’s pep-talk.

Q –  What are you listening to lately? Can you recommend a track for us to check out?
T – There is this really terrific compilation called Lost Jukebox. I highly recommend it if you love discovering little obscure pop nuggets.
F – Tenacious D’s “Simply Jazz EP”
M – Vulfpeck and the new Carly Rae – Check out Boy Problems if you’re into the grooves and pop music
F – I was blown away by Shakey Graves live show recently and I’ve been checking him out. My fav track of his is ‘Dearly Departed’.

Q –  What do you have planned for the fall/winter, musically speaking?
M – Working on a new record. We are getting a little more quirky/psychedelic within the pop vibe.