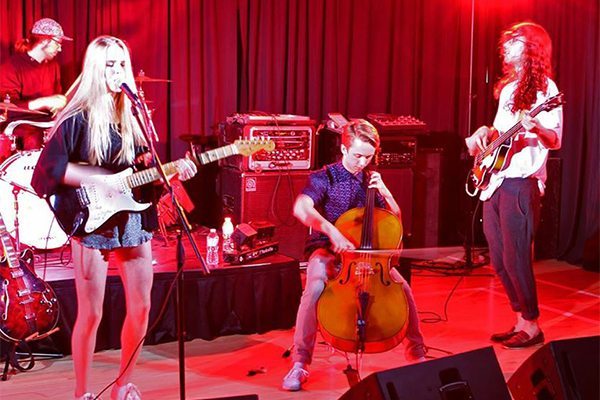 GREY\WATER is an indie rock band formed in Toronto, Ontario whose music has been compared to bands such as British alternative band Bombay Bicycle Club, Daughter and indie folk singer Lucy Rose. The band is a culmination of close friends and previous music projects blending their influences to create a very different and unique sound. Since forming in 2014, GREY\WATER has established a growing fan base all over Southern Ontario.

Q –  We are really excited to have you play Supercrawl this year. What is the first thing that pops into your mind when you hear the word “HAMILTON”?
The first word that comes to mind for us is definitely music. For us, when we come to Hamilton we are surrounded by so many amazing local bands. The music scene in Hamilton is certainly on the rise with amazing venues like The Casbah, The Baltimore House and Homegrown.

Q – Who are you looking forward to seeing at Supercrawl? (bands, artists, etc)
As a band i think we can all collectively say that we love Caribou and Health. They’re such amazing artists with a killer sound.

Q –  Supercrawl is an arts festival and besides the awesome music, the festival has all sorts of visual artists showing their work. Do you dabble in any other arts besides music?
Out of the band Haydn and Charlotte both go to school for art. Haydn is a photographer and Charlotte studies visual arts and art history.

Q – How would you compare playing a regular show to playing at a festival?
While all shows are great, playing a festival definitely gives you more of a chance to check out more artists and attract other people that perhaps wouldn’t have been interested in seeing you live if they hadn’t ran into you at a festival.

Q –  If you could put on your music festival what would be on your ‘must have’ list? (Alternately: If you have been involved in putting together your own festival – what did you have that you were proud of?)
Collectively, our music festival must have’s would include something along the lines of Mac Demarco, Tame Impala, Father John Misty, Bombay Bicycle Club and Sufjan Stevens. That’s our headliners anyway, if we were to actually put on a music festival, it could possibly be never ending.

Q –  If you could do a band/musician swap with another band/musician for a day and get to play their music at a live show – who would that be?
Mac Demarco FOR SURE. We’ve covered multiple Mac Demarco songs over the course of our existence as a band, simply because they are so much fun to play. Much like everyone else that gets a listen to Mac we know that his sound is infectious and his songs are in your head for days.

Q –  What’s the best thing you did all summer?
This summer has been sort of quiet for us in terms of huge events and shows, we’re just focusing on recording and it’s actually been a lot of fun. We do everything ourselves so it’s been fun to figure out how we can make our music more interesting in terms of both engineering and post production.

Q –  Where do you draw your musical inspiration from?
We draw it from everywhere. When i write a song i have my own influences based on what artists i’m into at the time and then when i bring them to the rest of the guys everyone in the band brings all of their different influences to the table.

Q –  What is the last thing that crosses your mind before you get on stage?
I’ve actually never thought about that. I suppose usually it’s just “Well, I better not screw this up”.

Q –  What are you listening to lately? Can you recommend a track for us to check out?
Lucy Rose has just released her new album and i’ve been loving it. I definitely recommend checking out her BBC Radio 1 cover of Taylor Swift’s song “Bad Blood”. She raps the Kendrick parts and kills it. As a band once again I think we’ve all been enjoying the new Tame Impala album.

Q –  What do you have planned for the fall / winter, musically speaking?
Right now and probably until the new year we’re recording our album. We have a maybe one or two shows a month planned but for the most part we’re keeping it pretty mellow for a bit while getting the album organized ready for next year.