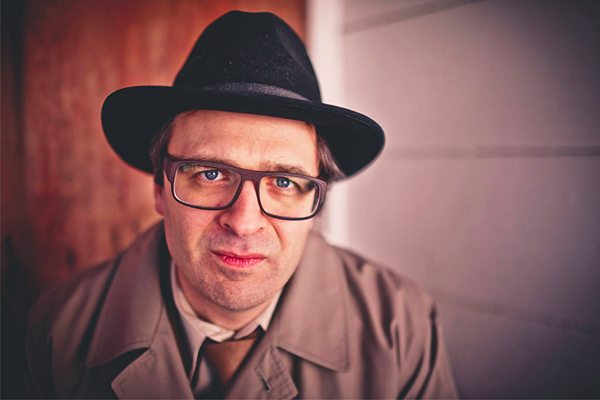 Friendly Rich is a musical renaissance man from Oakville, Ontario. Rich holds a masters degree in music from UofT and has done everything from recording music for the Tom Green Show, to creating his own record label. Rich often plays with his ensemble, The Lollipop People and they are bringing their brand of eclectic party music to Hamilton for this year’s Supercrawl fest. Check out our Supercrawl Q&A with rich and make sure you scroll to the bottom to watch the video for ‘Sausage Samba’, it is fantastic.

Q –  We are really excited to have you play Supercrawl this year. What is the first thing that pops into your mind when you hear the word “HAMILTON”?
I think of a city with true grit.  I think of a label like Sonic Unyon that’s been around the block and has shown great inteGRITy over the years. To me, Hamilton seems like a real fixer-upper, so much potential. It ain’t Brooklyn, the same way Toronto ain’t New York.  It’s its own city, god dammit, with some great birding outlooks, real troubles, and pockets of genuine culture.  A festival like Supercrawl is something every city dreams of, but few can foster properly, and when it seems forced, you can smell it!

Q – Who are you looking forward to seeing at Supercrawl?
I am loving the new Terra Lightfoot record, and was supposed to share a stage with her earlier this year, so I’m looking forward to catching her set; as well as Lanois, and of course Fred Penner is one of those gentlemen in music that I’ve had the honour of working with in various contexts over the last few years, so I look forward to spending time with him again.

Q –  Supercrawl is an arts festival and besides the awesome music, the festival has all sorts of visual artists showing their work. Do you dabble in any other arts besides music?
My focus has always been music, not much else in the way of other art.

Q – How would you compare playing a regular show to playing at a festival?
I enjoy the religious nature of a residency, say at The Cameron House, where The Lollipop People and I play regularly.  However, the special energy of a festival is an exciting community to be a part of.  You feel like you’re adding a chapter to a much larger vision, and it’s great to connect with not only the other musicians and artists, but also a new audience who may experience us for the first time.

Q –  If you could put on your music festival what would be on your ‘must have’ list? (Alternately: If you have been involved in putting together your own festival – what did you have that you were proud of?)
I founded The Brampton Indie Arts Festival for around ten years in my hometown.  It was hard work, but so rewarding to to present folks like The Nihilist Spasm Band, Marc Ribot, Owen Pallett, Mark Mothersbaugh and many more.  I was very proud of the festival, and what it celebrated, which was truly unique artists working on their terms.  I also loved how each year it got weirder, and acted as a way to help us fight suburban boredom.  I miss the experimentation and guerrilla-style programming that we helped stage.

Q –  If you could do a band/musician swap with another band/musician for a day and get to play their music at a live show – who would that be?
Dave Clark’s Woodshed Orchestra are a great inspiration to me.

Q –  In your opinion – what was the  ‘summer jam’ of 2015?
Check out The Holy Gasp, their new cassette and live show blew my mind.

Q –  What’s the best thing you did all summer?
I went to Quebec with my dear wife, Lyne.

Q –  Where do you draw your musical inspiration from?
I make music to stay sane.  Sometimes I fail.

Q –  What is the last thing that crosses your mind before you get on stage?
Especially when touring (due to travel constipation), but almost every time I perform, right before I hit the stage I get this little tinge of healthy anxiety which usually comes in the form of an untimely poop.

Q –  What are you listening to lately? Can you recommend a track for us to check out?
Anything from the new Kevin Breit recording Ernesto and Delilah is true gold.

Q –  What do you have planned for the fall / winter, musically speaking?
Close to being finished writing a new record.  Now the fun part, to get back in the studio, then planning to go back to Europe later in 2016.