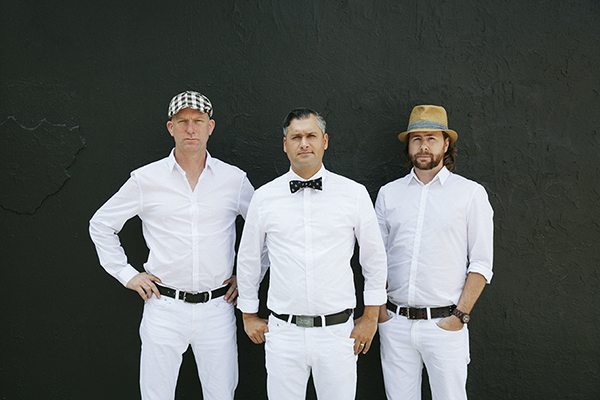 Elliot Brood are in a long line of talented musicians who have decided to make good ol’ Hamilton their home over the past few years and we are glad to have them.  All talented singers and multi-instrumentalists, Elliott Brood are known for swapping instruments on-stage and mixing dark acoustic roots sounds with more rock-oriented electric guitar songs.

Q –  We are really excited to have you play Supercrawl this year. What is the first thing that pops into your mind when you hear the word “HAMILTON”?
Now I guess the first word that comes to mind would be “home” As of June all three members of the band live here.

Q – Who are you looking forward to seeing at Supercrawl? (bands, artists, etc)
We’re going to see our old pal Corb Lund and The Hurtin Albertan’s.  We toured with those boys almost 10 years ago and they taught us a lot about performing and other things…  I’d like to catch some of Monster Truck too, but I think our sets overlap.

Q –  Supercrawl is an arts festival and besides the awesome music, the festival has all sorts of visual artists showing their work. Do you dabble in any other arts besides music?
Mark is a pretty talented graphic artist.  He does the artwork for our records.  Steve has mastered the art of “aging gracefully”.  I’ll eventually write a book, but that’s easy to say because I haven’t started yet

Q – How would you compare playing a regular show to playing at a festival?
I think we try to perform the same way.  Sometimes a little of the intimacy is lost on a larger stage, but we always try to make an effort to change that.  I don’t think our energy or approach to our shows is any different whether its at This Ain’t Hollywood or on a big stage outside of it!

Q –  If you could put on your music festival what would be on your ‘must have’ list? (Alternately: If you have been involved in putting together your own festival – what did you have that you were proud of?)
In no real order, and this sounds like a pretty heavy country fest, but MGMT would shake all that up.

Q –  If you could do a band/musician swap with another band/musician for a day and get to play their music at a live show – who would that be?
I might have to say NQ Arbuckle for that too.  Probably the most under rated band and songwriter in our country

Q –  In your opinion – what was the  ‘summer jam’ of 2015?
“Hats Off To Larry” from Del Shannon Live In England, recorded in 1972.  I’m sure there’s also been some good jams actually released this summer but since I got a proper turntable, radio has been off.

Q –  What’s the best thing you did all summer?
Took my 2 year old son camping in my backyard.  Sounds boring that a musician’s best thing of summer is something like that but it was awesome.  A close second was taking my daughter on the hike up at Webster’s Falls.  Hamilton has some pretty beautiful natural secrets.

Q –  Where do you draw your musical inspiration from?
No idea.  Probably from listening to music and reading.  I find I’m more inspired to make music when I listen to more music.

Q –  What is the last thing that crosses your mind before you get on stage?
Good question.  It’s probably always different.  Sometimes it’s hoping the show goes well, sometimes it’s worrying that I should have gone to the bathroom first.  A lot of times it’s that feeling that we’re really lucky to be up there, like “what if this is the last time?”

Q –  What are you listening to lately? Can you recommend a track for us to check out?
I mentioned Shovels and Rope.  They are a married couple who travel and write together.  Anything by them is incredible, but I would recommend Cary Ann Hearst’s (the wife) album “Lion’s and Lambs”.  She has one of the best voices you will EVER hear and songwriting skills to match.  Check out the track “Easter Continental Divide”

Q –  What do you have planned for the fall / winter, musically speaking?
We’ve actually just begun work on our next record.  We have a space in Hamilton now where we can write and rehearse.  We do have a fall tour of the east in November as well.  We’re going to France for 1 show which is strange for sure, but you try not to question these things in this business