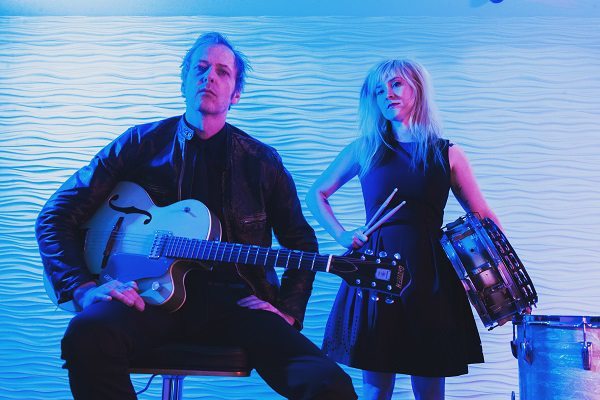 Catl is a rock n’ roll duo hailing from Toronto with a reputation for getting people off their asses to do a little drinkin’ and dancin’.  The band features Jamie Fleming bashing away on his ’40s Gretsch, while Sarah Kirkpatrick holds down a steady, dirty groove on the two-piece drum kit. This super-charged couple have been lauded for their intense live performances and engaging stage presence. You know that this is a great band to see live because other musicians have highly recommended seeing them in the past.

Q –  We are really excited to have you play Supercrawl this year. What is the first thing that pops into your mind when you hear the word “HAMILTON”?
We’ve been playing in Hamilton for years now (since about 2009) and had some really awesomely fun shows – playing with Jon Spencer’s band Heavy Trash and another time with Cousins at the Casbah, along with so many fantastic shows at This Ain’t Hollywood with fabulous local and touring bands, it’s difficult to keep track of them! We’ve made a lot of good friends there, and even shot a video with an all Hamilton production team (5th Monkey Productions) and cast (local hero Jim Fitzgerald of Frankie and Jimmy, Snowheel Slim who plays with Ginger St James, and our dear friend Paul Toyne). Hamilton has become synonymous with great friends and really fun shows. We are excited to play Supercrawl!

Q – Who are you looking forward to seeing at Supercrawl? (bands, artists, etc)
We’re excited to be part of a festival featuring so many fantastic artists including our friends Elliot Brood, Rich Aucoin, Whitehorse and the Sadies.  Playing a festival with Sharon Jones is also pretty amazing – I hope we get to see her!

Q –  Supercrawl is an arts festival and besides the awesome music, the festival has all sorts of visual artists showing their work. Do you dabble in any other arts besides music?
Neither of us really dabble in other arts, unless you include knitting as art… but  I don’t think I’m good enough to call what I do “art”. J Within the band I (Sarah) have moved from playing the organ to playing the drums, which was a big shift for us artistically. On the records I play many instruments including piano, organ, accordion, percussion and drums.

Q – How would you compare playing a regular show to playing at a festival?
Festivals are real ‘fly by the seat of your pants’ with respect to no sound checks or borrowed gear. It can be challenging but forces you to adapt. Also, the ability to reduce the disconnect between the musicians and the audience on a large stage is different than having people up in your grill. We started out playing house parties, so it’s quite different.

Q –  If you could put on your music festival what would be on your ‘must have’ list? (Alternately: If you have been involved in putting together your own festival – what did you have that you were proud of?)
In terms of ‘must have’, a taco truck is pretty much near the top, followed by vibrating easy chairs backstage.

Q –  If you could do a band/musician swap with another band/musician for a day and get to play their music at a live show – who would that be?
We are terrible at figuring out other people’s music so it would have to be someone into the primitive thing like us, say The Ramones or The Cramps. Tough to swap with people that are dead.

Q –  What’s the best thing you did all summer?
Finally took a vacation.

Q –  Where do you draw your musical inspiration from?
They’re pretty much all from Mississippi and they’re all pretty much gone.

Q –  What is the last thing that crosses your mind before you get on stage?
“Ok here we go! Don’t f@#k it up!”

Q –  What are you listening to lately? Can you recommend a track for us to check out?
Sure can, this song’s called ‘Hey Shine’ from Snatch & The Poontangs. It’s actually a Johnny Otis side project of dirty ‘R and B’ tunes. It borrows the ‘Bo Diddley’ beat and when I heard it, I thought that we needed to have a song using that beat! So we wrote “Gateway Blues”

Q –  What do you have planned for the fall / winter, musically speaking?
In October we’re touring down to the Southern U.S. to play a Deep Blues Festival in Clarksdale MS, and it looks like we’ll be heading to Europe this Winter for the first time in December!