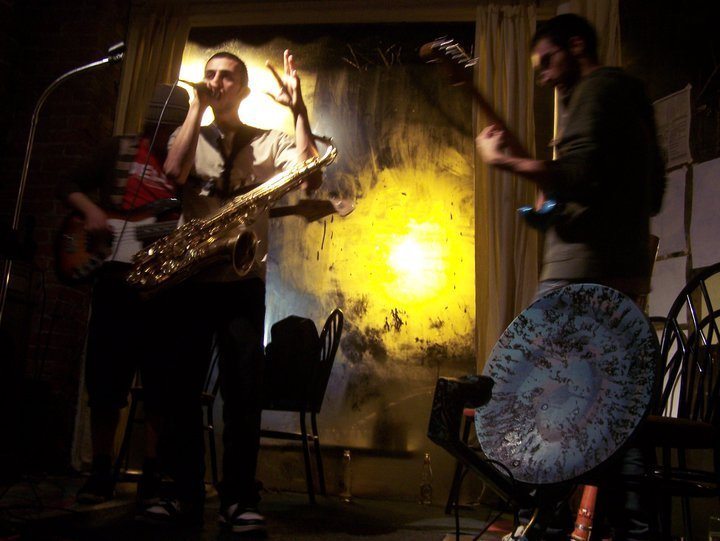 Tarek is probably musically best known as the frontman for the Hamilton hip-hop-fusion outfit UFO’s (Unidentified Funky Objects).  And ideologically, he’s also best known as a frontman, holding the line at demos and actions across Turtle Island.  He left the Hammer for a stint and has just come back to us.  He’s celebrating his grand return the best way he knows how.. with a bumping bill of a show – this weekend at Homegrown Hamilton. Tarek will play along side Canadian Winter, Haolin Munk, and DJ LP

Tarek!  Welcome!  So glad to have you back in the Hammer.. we missed you.  Tell us a bit about your time out west.  How’s the music scene?  How’s the hip hop scene? And what did you miss about making music in Hamilton?
Victoria, was neat and the island is like a microcosm of B.C in general, nature tripping and the ocean were the highlights for me. The music scene there was tight!  Lots of folk and electronic music, a strong spoken word scene, and some Hip-Hop. Soooo different from Hamilton! What I learned there about the music scene was people seek out what affirms their experiences and identity. As in, you’re not going to find a lot of raw gritty Hip-Hop in a well-to-do mostly white city, you will find people rapping about weed and chillin in the ocean breeze.

I saw similar dynamics in the spoken word scene, kinda made me sad actually, because I was expecting the words Slam Poetry to reflect the true tradition of that title, like the works of say, Hamilton’s own Klyde Brooks, or something more Def Poetry and Gil Scott Heron-esque, passionate and firey, content driven. Instead what I found was a populous enthralled by very stylistically gorgeous poetry that felt a little too flowery and wordy for my liking. Still interesting and at times political though.  Anyway, I made an album – He Found Brick Inedible  with my homie Monkey Wrench who recorded and co-produced it expertly. I did some shows with Test Their Logik and The Beat Assassins, and volunteered a lot with the local Immigrant & Refugee center, throwing a benefit show for them before leaving, that was dope! Its nice to rap to a non-white audience sometimes, I miss Toronto & Hamilton for that.

P.G. is a nice place to live if you like winter. I made some good friends, and created the Rebel Funktion EP, and played a couple of shows. There’s a strong Hip Hop scene, but it was unfortunately very gangster, which limited my involvement in it, as I work with youth in group homes and didn’t want them to associate with gangs through my shows. The only Hip Hop shows I knew of were ones at the Ramada Hotel where you get searched before going in. Being a big hub in Northern B.C. lots of drugs flow through that town, so gang activity is high – though it’s not as bad as Maclean’s Mag would have you believe. Really it just reflects the situation of oppressed people everywhere, especially First Nations and people of colour.  If you have little access to proper education, rampant poverty, and no one is gonna hire you because racism is embedded everywhere (in people and institutions), chances are you’re going to hustle your way out rather than starve. The sheer amount of publicly expressed hickery and racism I felt, and more so saw directed at First Nations peeps is disgusting. I think living in Toronto and Hamilton for so long I got used to people being a little more covert with their racism – P.G. was like a big wake up call for a sheltered privileged cis-gendered man like me, that spent most his time in Kanada surrounded by other people of colour. We got a long ass way to go before justice is actualized. I missed Hamilton because people seem to know that. It’s a gritty city that knows how capitalism mistreats and abuses, and works together using the arts as a banner to highlight those issues. Plus money is not really a big motivator for artists there, meaning almost no barriers between scenes that foster true artistic collaborative innovation. The Hammer rules yo! 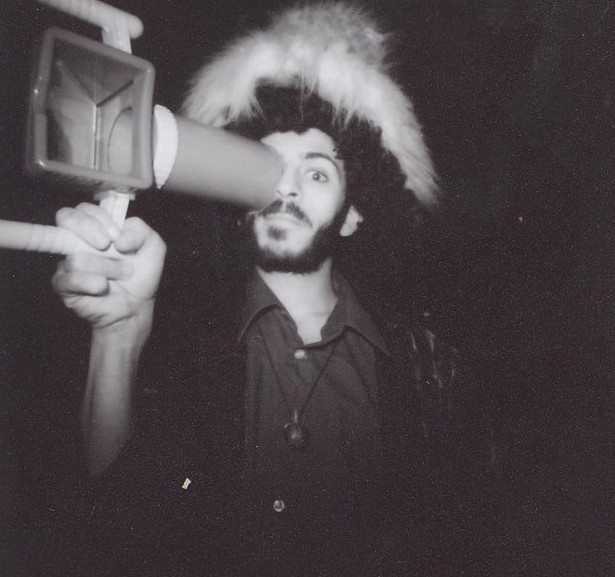 You are known as Tarek Funk; Mother Tareka; Mama T.. you have been a UFO co-pilot.. a member of a marching band. You’re a lyricist,  composer,  performer, busker,  you MC,  sing,  play sax,  flute,  beat box,  you manipulate pedals, samplers.   What’s your musical background?  How did you get to this point.. this convergence of styles & instrumentation?
I was lucky enough to have come to this country – though I do critique it, its still a comfy safe place to live – from Syria in ’98. I lived in T.O. (until I went to McMaster in ’03), and in grade 8 they gave me a flute. Like most my peers I was a sexist homophobic dick at the time, so I resented the whole affair.  I learned how to read sheet music because I was the only one who didn’t know it in my class. Then I got into it more and more, and with the help of some wicked supportive music teachers – shouts to Mr. Beatty & Ms. Scott – I began to blow the horns on some jazz. That was so liberating! I would listen to jazz on the radio at home because my English was still rough, so that was the only station without words, plus it kinda gets you high (both jazz & playing woodwinds). As I learned the language, grew up and fell out of love with the glamour of Western consumer culture, I became more politicized, and started to listen to political funk by Gil Scott Heron, Bill Withers, Nina Simone, Millie Jackson, Stevie Wonder, James Brown, and Sly and The Family Stone, and began writing poetry and rapped it over funk breaks, out of spite really – thinking if 50 cent is getting paid big time for doing it poorly, the least I can do is honour the word tradition that is huge in Arab culture. My pops wrote and read poetry to us growing up, and there are Syrian / Lebanese freestyle poetry/singing battles from the 60’s that I used to love watching, where poets compete by who can best fit a topic, compliment the other or themselves. I didn’t start performing til ’03, when I had fully internalized the energies of Warsaw Pack, Pocket Dwellers, The Roots, Blackstar, Aesop Rock, K-OS, and Lauryn Hill, and realized the true potential of the medium.

The message is central to all your work.. expressing a radical and fiercely leftist point of view.  What role do you see music playing in movements for social justice?  Looking back at the last couple years.. what has been fuelling or inspiring you, politically?   And how do you work that into your music?
I aim to write music for everyone to dissect, not only dance to. Music to fuel the fire. I don’t know how true this is, but I’m hoping that since Hip Hop is a universal language that seems to appeal to all people, even narrow-minded oppressors (read: macho male pricks), maybe they will heed a wake up call. Basically, “Check yourself before you wreck yourself” fool! If not it will provide an empowering soundtrack to the those in the exhausting fight against oppression. I’m calling for empathy and action in solidarity with the oppressed, those being (in no particular order) queer, trans, womyn, indigenous, of colour, and differently abled peeps worldwide. There is so much interlocking hierarchy within oppression that I find it hard to do that without practicing the privilege that comes with being a cis-gendered male. Nonetheless, I’m gonna use this platform for what I see as good, like calling out men on their bullshit. I want men to learn how to be proper allies, to drop homophobia and transphobia from their language and actions. I’m really inspired by activists that put their lives on the line for justice, peeps at No One is Illegal, peeps fighting the Tar Sands and pipelines, and the queer movement globally that stage pride parades in countries like Uganda where their identity is punishable by death. I’m also inspired by knowing that powers of neo-colonialism (the main reason why the Syria and the Middle East are unstable) never changes on its own, its made to change by the dis-empowered collective.

You started a radio show while you were out west.. a conscious/radical hip-hop program.  Can you tell us a bit about that.. and share some gems you came across while mining for content.
Chelsuela aka The Monsta aka my lovely partner in grime, wife, and so much more, started Lace Up Radio with me because we were sick of hearing country on the radio, or hearing misogyny and macho-ism pop raps as the only alternative. Even college radio is guilty of pushing sexist crap onto very impressionable teenage radio listeners. So we put out weekly episodes – archived at mixcloud.com/laceupradio1 – through U.N.B.C’s CFUR 88.7 FM. I actually got the youth I work with listening to it regularly, and asking me about the MCs and the concepts. Here’s some gems we found like queer positive rhymes by 1eft, and N.Y’s Micki Blanco, and D’bi Young. Some wicked female artists that hardly get enough plays, like Sa-Roc, Medusa, Invincible, Angel Haze, Akua Naru, Shadia Mansour, and one of my favourites StaHHr and her album Mother Nature with Molotov. Radical lyrics from Intikana, Lowkey, Logic (Peoples Army), Akala, Bambu, Homeboy Sandman, IAmMany, Rebel Diaz, Omar Offendum, P.O.S., Brother Ali, and we reach for lots of Kanadian cats like Eternia, Nomadic Massive, The Narcicyst, Nilla, ES, Monky Wrench, Test Their Logik, Lee Reed, Canadian Winter, Crown A Thornz, Ian Kamau, Humble The Poet, Lady ASG, Freedom Writers, and Shing Shing Regime.

What’s the musical plan for 2013?  What do you hope to accomplish by this time next year?
I’m gonna take it slow at first, but I’m anticipating a new live act forming organically, plus recording an album from a collection of songs I wrote this year and beats I’ve made or got from producer Moment (ryanzak.com). There’s also a summer tour and EP in the works with Monkey Wrench and producer Duque Nuquem, and I’m dying to collaborate with some Steel City cats!

This time next year I’m hoping I will be fully a part of the Hamilton community doing direct-action activism, and to continue my Lace Up radio show through CFMU, and make more time to put on decolonization, anti-racism, and gender competency workshops. I’m actually putting on a free decolonization in practice workshop on Sat. Feb.9 (6 – 7:30pm @ 27 King William St. – Homegrown Hamilton) before my show there.

—
The Canadian Winter / Mother Tareka / Haolin Munk / DJ LP show is going to be excellent. Check out our post for all of the details.