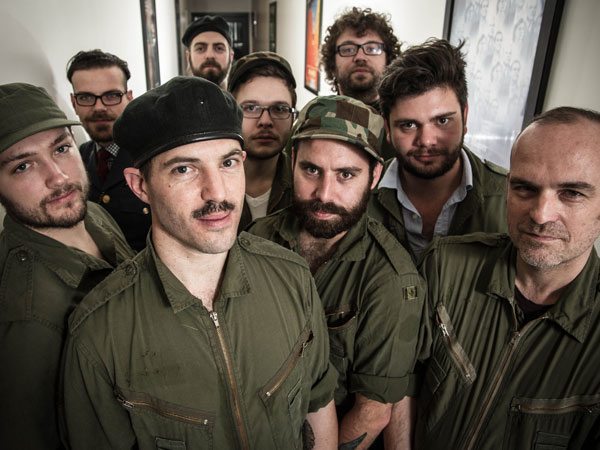 I first saw the Minotaurs during Guelph’s  Kazoo festival and they made quite the impression on me.  The guys are coming to Hamilton this Friday to promote their latest release, New Believers. While their sound has always been a combination of afrobeat, funk, and jazz – they have returned with a grittier and harder sound.

The band is not shy about revealing their political beliefs. From revolutionary hopes, to a response to Quebec student protests, to a reaction to the G20 disaster – the Minotaurs have complimented their hypnotic afrofunk sound with though provoking, and inspiring lyrics. You can find their music for streaming / downloading on bandcamp.

We were able to do an interview with band leader, Nathan Lawlr, as the band gears up for their first Hamilton show later this week. Check out our event post for all of the show details.

Congratulations on New Believers, I’ve had it on repeat for a while. It is a great record. Can you tell us a little bit about how it came together? How does song writing work with a 12 piece band?
Glad you like it. Thanks! I usually work out the songs in advance, demoing and developing ideas at home. I then bring the demos to the other guys and horn arrangements and other structural ideas come together from there. It’s actually pretty easy. Everyone has a job to do. While 12 seems like a lot, no one is superfluous.

In your Quebec Student protest inspired song, “Make Some Noise”, you say “We can only wake the giant if we make some noise.” Who is the giant? Were you able to play that song during any of the Casseroles protests?
The giant is the overwhelming belief that the neoliberal global economic structure is only way to do things. Most people generally accept it as either ‘just the way it is’ or something natural. We rarely question what politicians and economists really mean when they use the word “economy.” We never ask for clarification as to what kind of jobs they mean when they claim to want to create them. This idea that we are all subjects to the economy instead of the reverse is a world-view invented by the rich to further their own interests. If you don’t believe me, read Howard Zinn’s A People’s History of the United States or Eduardo Galeano’s Open Veins of Latin America. Also, check out Antonio Gramsci’s ideas on the “cultural hegemony.” By causing a ruckus, when can hopefully change this perception and challenge the monied interests that are not concerned with the common good.

You also did a beautiful song with Sarah Harmer in response to the G20 disaster. You guys are not shy about expressing your political beliefs and that is, no doubt, a big part of your appeal. Who are some of your favourite politically minded musicians?
Fela Kuti is obviously a big inspiration. He was and is still a complicated character but his message is as pertinent now as it was then. And while he mostly criticized the Nigerian government, the same critique can be applied to other governments that lean toward repression in all its various guises. Sarah is one of a very few Canadian musicians who is outspoken politically which is why we asked her to help with that tune. To be honest, sadly, there aren’t many others I can think of who consciously and repeatedly speak out publicly against the right-wing swing the world is taking. I would congratulate Sarah Slean for declining her Jubilee Medal in solidarity with Idle No More.

If you could make up a super group of bad ass revolutionary leaders  – who would you recruit?
Ghandi, Martin Luther King, Malcolm X, Antonio Gransci, Vaclav Havel, Chris Hedges, Howard Zinn, Eduardo Galeano. There are probably more but this would a pretty awesome team.

We are excited to have you in Hamilton! Do you listen to any Hamilton bands / musicians?
I don’t listen to much music made in North America after 1979 BUT Caribou rules, so does Wax Mannequin, my pals Julie Fader and Dylan Hudecki are from the Hammer and they rule too. I am sure there are lots of others I can’t think of at the moment.

Thanks a lot, Nathan!