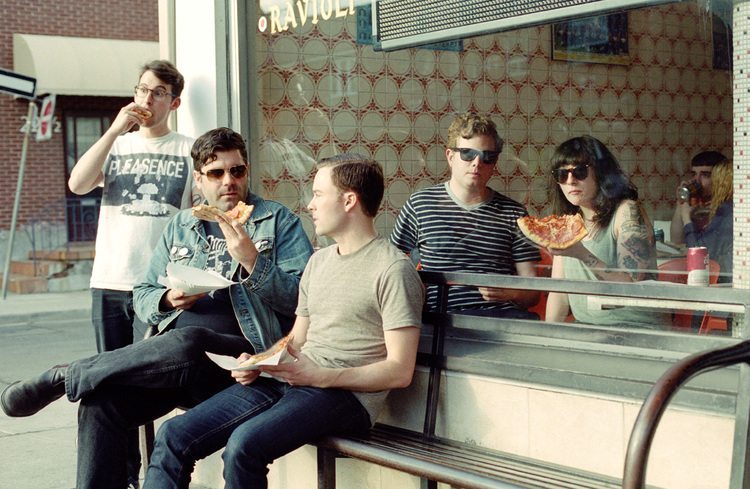 The Ketamines have been around for a while. A group since the ’90s, the band has  gone through about 8 different line ups up to present day. That’s a lot of musicians. The constant figures in this ever-changing, creative, musical wonderland have been Paul Lawton and James Leroy.

I did a lot of research before my interview with Paul. I learned about his background as a PhD student and an academic, about the move from  Lethbridge to Toronto, and about his controversial blog.  Many people were angry with Paul. Many people agreed with Paul. I found the blog to be hilarious, and I thank Paul for the many deep-belly laughs his writing gave me.

But, that’s enough about the blog. The real reason we are here is to appreciate The Ketamines  and their fantastic latest release.

Q – The Ketamines are currently in the 8th official line up, since the band started, right? What’s it like having worked with, and said goodbye to, so many musicians?
Ketamines has always been myself and James Leroy – we’ve been making songs together since late 90’s, but it wasn’t until we started calling ourselves Ketamines that anyone really paid attention to, and necessitated a live band. We are inspired by people like MF Doom, or the Undertaker, both of whom have been accused of sending out fakes for live performances for years, and is pretty much how we want to handle playing shows. I think we might start Ketamines East and Ketamines West because driving between Toronto and Vancouver sucks.

Q –  Tell us a bit about your new 7”, and what its like working with Mint Records?
The Mint 7″ is actually the 4th in our 4 7″ series, the first came out on Pleasence Records out of Toronto, the other three are coming out on Leaning Trees in Saskatoon, Hosehead in Toronto and then, as you say Mint records. We only work with labels and people we like already, so working with Mint is unsurprisingly really great. We are on board with the Mint resurgence, I love the Renny Wilson and Jay Arner records, and especially Tough Age, who we are bringing to Hamilton with us. Tough Age used to be known as Korean Gut, and I put out the Korean Gut 7″ which remains one of my favourite releases.

Q –  What is your song writing process like? Are you one of those people who writes all the time, or do you write for specific records?
James and I write constantly. He writes and sends me stuff, I work on it, send it back, he works on it, sends it back, we fight about it and then we move on and go back and talk about how awesome our songs are. I think we had 40 songs in contention for You Can’t Serve Two Masters LP, and are already have about that many for the next LP. Ultimately James decides what goes on what and ultimately I trust him. We’ve been working together since for so long.

Q –  In your opinion, what’s the best song you ever wrote? Lyrically, what is the song you are most proud of?
There are some songs we are still sitting on that we constantly talk about as being our best. I think “You Can’t Serve Two Masters” is my current fav, but I also really like a new song “So Hot!” that is coming out on the Hosehead 7″. My favourite lyrics are from the song “The Runaround” on the Spaced Out LP, a song which is a song I wrote about how hard it is for me to maintain relationships with people, my personal struggles with social anxiety, self doubt, and how often I give people the runaround as a way to avoid confrontation and awkwardness.

Q –  I read that you worked in a Calgary group home while doing your Phd, and that you had to deal with some pretty intense characters. What was that like?
I worked in group homes from 1998 until 2012, and still talk to a lot of my clients. I worked in one group home in particular that was violent, but the main home I worked at for like 13 years was really chill,those guys are still some of my closest friends that I miss dearly and talk to often. The violence never made it in my songs, but my main group home was a frequent source for inspiration, seeing these guys reaching out for affection and constantly being rejected. Working life is a terrible thing to write songs about, especially in my office jobs that I do know. I long for freedom.

Q –  I am a big fan of your blog. I find it hilarious, and refreshingly honest. You’ve called out exclaim, Polaris, Factor, CBC music, CMW.. and others, I’m sure. I agree with you that the Canadian music industry needs work – – what kind of changes do you think need to occur to put the Canadian music scene on a better path?
I actually stopped that blog because it got too much heat, and I had a dream where my tombstone was “Slagging off dude.” Like, I can tour a million times, run a record label, make songs, make art and I’m known for a Tumblr? Kind of sucks. I was really making things so hard on myself when there is no motivation from anyone to really change anything, and more so, for all the people who quote unquote supported the blog to help carry the baton, so I stopped.

The current Canadian indie rock bubble is about to burst with or without my help, and the only chance of survival is building things on a local level and it will correct itself. The bigger Canadian music industries have strip mined everything and it will come crashing down soon enough.

Q –  You must have had some awkward encounters with bands, and artists, whom you’ve torn apart on your blog. What’s it like when you have to see some of these people in real life?
I’ve had plenty. As someone who is already awkward, it is horrible, and part of the reason why I stopped. I actually feel bad about a lot of the mean stuff I said. Lots of the bands got where I was coming from and agreed with most of what I wrote, so who knows. You have to know that I was getting hounded by bands who were wanting a turn, and that response in and of itself sickened me.

Q –  Do you have any insights on what it takes for a Canadian band to make it as a ‘career band’, in terms of a respectable salary? Is it even possible?
Hire a publicist who can get you on Pitchfork or get a decent grant writer. Being a career band that works without funding or buzz is a slow ticket to poverty. The musician middle class no longer exists in Canada, you have a few bands who can support themselves financially, but most of those are subsidized and the ones that aren’t are getting major buzz outside of Canada. The whole system is unsustainable and people looking for a salary are better off getting a job at Tim Hortons.

Q –  Who does the illustrations that accompany a lot of your stuff?
The 7″ collage was done by Felix Morel in Montreal and the LPs are early singles, t-shirts and posters are done by my friend C.M. Ruiz who lives in Seattle.

Q –  What are you listening to these days? Do you have a track to recommend?
Such a hard question to answer for some reason. I listen to the new Uncle Bad Touch and Jay Arner LPs all the time, but I listen to a lot of modern hip-hop, jazz. I like the new Biblical and Tough Age Lps that aren’t out yet. All over the map always.

Q –  We are looking forward to having you play Hamilton. Do you listen to any Hamilton based bands? Any thoughts on the Hamilton music scene?
Of course, I listen to Mystics all the time, Tv Freaks, The Evil Eyes… the whole garage punk scene there rules so much. As a band, we’ve toyed with covering a Simply Saucer song, and we’ve covered Teenage Head in the past, and toured with B.A. Johnston a tonne. Out last show in Hamilton in June had like 4 people there, so maybe this one will be a little better?