Interview with The Reason

After many years of triumphs and set backs, lineups, and broken vans, The Reason is gearing up to celebrate 10 years of music this Saturday at Club Absinthe in Hamilton. Find all of the show details on our events page.

Saying that The Reason are well loved in Hamilton is a bit of an understatement. If you look closely you will see people wearing their iconic tshirts at shows, parties, and campuses around town. The fans that The Reason have gathered over the years are loyal fans, and it isn’t unusual to come across someone who has been following them from the beginning. In a sense, The Reason, are a great example of what makes the music scene in Hamilton work:  nice and talented group of musicians have had successes and failures and they take it all in stride while being immersed in our community and while helping young artists get their footing. We caught up with Adam this week as the band prepares for their big 10 year anniversary show.

Q – First of all.. how does it feel to be celebrating 10 years being in one band? That is quite the accomplishment.
It all sort of snuck up on me.  I was doing the discography section on our website back in January, and put February 2003 for our first EP, and then put January 2013 for our newest EP.  It dawned on me and has stuck with me all year.   You sort of look back on all the things you have done and all the things you haven’t done.  It has been nostalgic to say the least.

Q – What are you the most proud of, in terms of accomplishments / memories, etc, from the first 10 years of The Reason?
I am proud of all of the music we have released, and the strength that Cubby, Ronson and myself have shown through all of the many hurdles that have been placed before us.  It seems to be the story of our band;  just when things look like they are looking up, we are delivered another blow, but we always muscle through.   We have grown a lot as people and have been through the most together.  I couldn’t ask for two better friends.  I still feel confident and proud of the songs and recordings we released 10 years ago, and feel like even though they sound nothing like we do now, I remember them, and can listen to and play them with confidence as an important part of my life and my growth.

Q – What is your approach to song writing? Do you write all the time, or do you write in focused project-specific bursts?
Definitely project-specific bursts.   I have honestly not completed a new song in over a year.  Now that I know that a new recording is upon us, I will listen back to the hours upon hours of song ideas I have stashed away, and the group of ideas that make me the most stoked will comprise the next album.  Winter for me is the best time to write.   It’s always been this way for me.  All of our records, though not concept records have always fit together in my eyes and have always had a theme.  Now that this period of nostalgia and reflection (hollow tree) has come to a close I have a strong feeling the next record will be all about letting loose and having fun.  Its about time.

Now that this period of nostalgia and reflection (hollow tree) has come to a close I have a strong feeling the next record will be all about letting loose and having fun.  Its about time.

Q –  I know that the West Coast leg of the tour was a little shaky, but can you tell us about the East Coast? How did those shows go?
We played this past summer at Fredrock in Fredericton and Saltyjam in Saint John.  They were the only East Coast shows we have played in a long while, but they were lots of fun, and made me miss the days when we used to go there all the time.  My favourite venue to this day is still The Attic in Halifax (RIP).  I have had the best fish and chips of life in PEI, ordered a drink at a bar at 3:45am and have met some of the best people around out there.  We need to go back.

Q – We’re really glad to hear that everyone is ok after your two freak accidents on the way home from the West Coast. Black Ice be damned! One thing that immediately stood out to me from the CBC article on your accidents was the quote where you say “what helped me was my time in a serious go kart circuit in the states..”. Can you tell us more about this? It’s an amazing insight into your life and we want to know more!
Between the ages of 10 and 17 I was a karter.  I got into it mostly because of my dad.  He loved working on engines etc and I started off on a small track near Windsor Ontario (where I was born).  My little brother eventually got into it as well.  We got more serious and for a few summers, we had sponsors and raced in the US in the World Karting Association (WKA) .  It was a trip.  I raced against Danica Patrick in Indiana before.  True story.  There were 30 karts in the race.  She won, and I placed somewhere near the bottom because of a huge accident on the first turn.  On the way home that day, we saw a huge tornado in the distance.  It was like Twister.  Later on the exact same drive while getting close to the Canadian border we were listening to the radio at 1:00am and the news broke that Princess Diana had died.   After that summer, I quit racing because frankly I was too tall, not very good, and way more interested in music, but I accredit my experience in karting to having never been in an accident before this one.  I have avoided many.  It was also probably the best times I’ve had with my family all together in one spot. 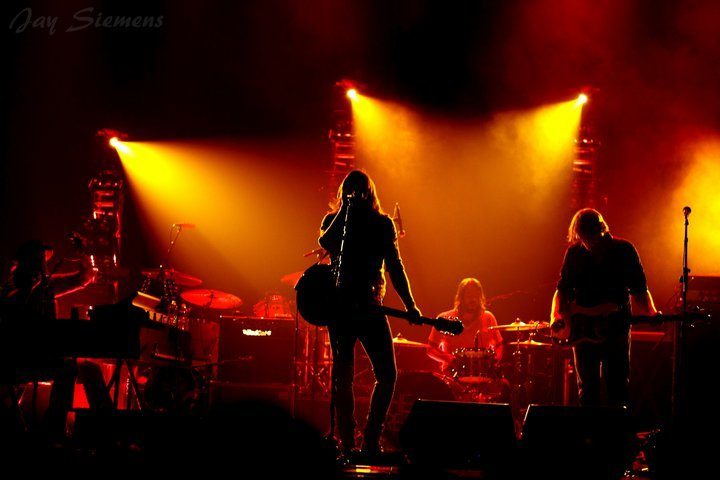 Q –  I know that you guys have been gathering footage for a 10 year documentary that you’re working on. How is that coming along? Do you have any favourite band documentaries that you are hoping to model this after? Or – – if not – – do you have any favourite band documentaries, period?
Don’t get me wrong, I love music documentaries and band documentaries, but I feel like they all have the same kind of story.  Band starts out, band blows up, band is more and more famous, band is older, has families, and works on new record for the last 20 mins of documentary.   No one ever gets to hear about the bands that struggle.   Ours is going to be more real life.  Just showing how it is in our lives as guys who are “still trying to make it” or whatever.  People hear your songs on the radio and have a jaded perspective of how our lives actually are as musicians in Canada today.  It’s not going to be a depressing piece at all….  Its just going to be real.  We have lots of great footage, and we’re really excited to finish editing it.

Q – We’ve spoken to Dawn and Marra and those girls think the world of you guys, they say that you are mentors and friends. What do you think of the new music scene that’s going on in Hamilton today? Do you think it is any easier for young bands / artists than it was for you guys when you were starting out?
I don’t think its ever easy for anyone.  To see bands like Dawn and Marra and the Dirty Nil and all of the new bands starting out and all of the passion and hard work they are putting into their craft is really nice to see.  Its not an easy thing to do what we do, and I raise a glass to anyone putting it all out there, pouring their heart out, and just leaving it out there for all to see hear and judge.  Hamilton is a rich artistic community, and I truly feel like the music scene here is younger, more vibrant, and hungrier than its ever been.  It’s inspiring even to me…

Q – If Adam from 10 years ago came to a Reason show on your most recent tour, what do you think he would make of the show and of the music? Furthermore, what do you think of the progress you guys have made and the changes in direction you’ve had?
I think he would maybe at best appreciate the live show, but hate the music.  22 year old Adam was chock full of piss and vinegar.  He liked what he liked and it all was sort of packed into a tiny bubble of angst.  By the time 22 year old Adam turned 25, he opened his ears a bit and started to appreciate all music thanks to albums like Cursive’s The Ugly Organ.  But 22 year old Adam?  Probably wouldn’t like it.   We have always just written songs that we feel are good at the time.  We have always wore our hearts on our sleeves and put it all out there.  The reason it sounds so different between 2004-2007-2010 and 2013 is because 3 years have gone by in between records.  We grow as people, as musicians, and most of our longtime friends and fans have been there with us for the whole thing.

I think he would maybe at best appreciate the live show, but hate the music.  22 year old Adam was chock full of piss and vinegar.

Q – What will The Reason’s 20 year anniversary party look like?
It will be Cubby and Myself in Hamilton Tiger-Cats helmets and shoulder pads, on stage armed with only the latest editions of MacBooks and Beats by Dr. Dre headphones.  Ronson will periodically prance around the stage in a leather vest and play catchy hooks on a trumpet, while shooting gluten-free burritos into the crowd using a t-shirt cannon.

Q – What are you listening to these days, personally? Can you leave us with 1 song to check out?
Love the new HAIM record.  Wanted to hate it, but fell in love with it and love it more and more every listen.  My jam is “If I Could Change Your Mind“.  It reminds me of being 12 years old roller skating around like a maniac at Wheels Roller Rink in Windsor, Ontario.   These girls are gonna be MASSIVE.

Thanks so much, Adam!