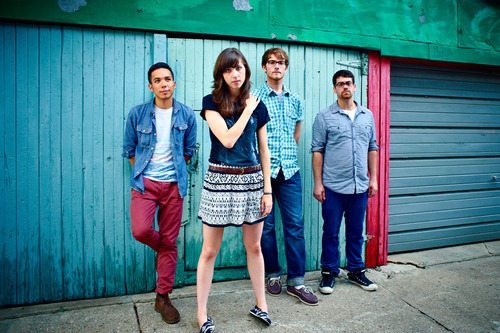 Interview with a Tiger

The Box Tiger is a rock/pop group with group with attitude.  In their music, that is. Sonia Sturino, lead vocals for the band, very sweetly answered a few questions for us below.

This fledgling powerhouse hit the scene in 2009 and has played a lot of big shows and festivals in the area. They are set to release a new album this spring (Sonia did not comment on the date), and could be quitting their day-jobs in no time. Meanwhile, you can catch them at the Casbah this Thursday the 25th.

Q -I see that the band has gone through some changes since its formation in 2009. Who are your new members and what do you think they add to
the group?
Right now the band is myself Sonia on lead vocals and guitar, Jordan Stowell on guitar and backing vocals, Ben Tran on Bass guitar, and Marcus cipparrone on Drums. I feel the the band is much more solid now, it’s also just different. We’ve changed a lot since initially starting and I feel at least it is in a good way.

Q -I’ve read that as your band has been getting on its feet, different members have been holding down part-time jobs. As someone who daylights at a cafe, I’m curious, what are some of your day-jobs?
Yea we pretty much work to make this work right now. We’re doing everything on our own, so that includes the bulk of the funding. I work general reception for parks and recreation of a town just outside Toronto, I also teach guitar lessons. Jordan works at a pharmacy, Ben works at a property management company and Marcus does fire protection installations. So we are all pretty busy.

Q -It looks like you’ve opened for some pretty cool acts including Sheep Dogs and Hollerado. What’s the most fun you’ve had playing a show?
To be honest I’ll now have to upgrade my favourite show experience to last night! We playing a release show over at The Rivoli.. it was just awesome and the crowed was great. Other than that I think collectively our favourite show experience was at this very very small venue in a small town called Bangor in Maine. We played there in December, it literally out in the middle of no where and the place was packed and there was just one of the more alive crowds ever.

Q -What can we look forward to on the 25th?
We’re going to try and do our best to put on a great show! We’re playing with a couple awesome Hamilton bands Gdansk and Quails in The Nest… so should be a great night over all!!

Thanks so much Sonia!