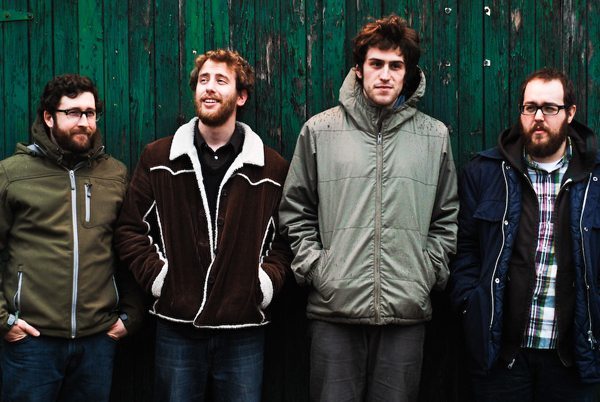 Since Huron‘s disappearance from the music scene in 2011 Hamilton has kept rocking, but maybe with a little less pedal in our pedal steel. The iconic Hamilton supergroup is reuniting for one night in February and I for one am glad they’re coming back. Huron, comprised of Adam Melnick, Pete Hall, Aaron Goldstein and Cam Malcom will be playing the Casbah this Friday. Find more details here.

I think the first questions we’ve all been wondering is where has Huron been and what have you all been doing?
Cam: We all took time to do other stuff. I went to grad school, Pete and Adam concentrated on their band Blackburn, as well as other work projects.

Aaron: I’ve been playing music pretty well non-stop, I’ve toured extensively with City and Colour on steel guitar and keyboards but also playing quite a bit with Daniel Romano in his band the Trilliums, which also afforded us the opportunity to tour with the legendary Wanda Jackson as her band. Also I’ve fallen into record production and have produced a number of projects over the past couple years and to continue to do more of those.

You’ve wrote the best chicken wing song I’ve ever heard. What inspired you to write this song? Do you have a favourite spot to eat chicken wings?
Aaron: Honestly, that song came out of nowhere and it wasn’t really about anything. I came up with the kind-of oddly timed verse thing and thought it was cool and built a tune around it, the big dumb riff came pretty easy too. Maybe the easiest time I’ve ever had writing a song, in fact I wish I had spent more time on the words. Lately my wife and I have done a bit of exploring into some crazy chicken wing recipes so I’m gonna say that my favourite spot is at home.

I can think of a number bands that might have influenced you over the years, but what are you listening to right now?
Cam: I’ve lately become sort of a flavour of the week type guy. I’m getting caught up on all the hip hop I’ve ignored for the past couple years. My favourite record of the moment is the Emmitt Rhodes anthology. He was kind of this home studio McCartney guy from the early 1970s. His songs are impeccable.

Aaron: I listen to more country music than any one man should, but I make a lot of that kind of music these days so I guess that figures. The Louvin Brothers, Buck Owens, Tom T. Hall, these are all things that are spun regularly on my turntable. I also still love rock and roll though,

Beginning in 2008 you recorded your studio album with legendary Canadian rocker Ian Blurton. Thinking back, was there a favourite moment working with him in the studio?
Cam: Not in the studio, but one time there was a friendly dove living in Pete’s backyard that it wanted to build a nest in Blurton’s beard. It kept trying to get in there and Ian was none too happy about it.

Aaron: the thing about Ian is that we’ve really continued to work with him almost non-stop since the recording of the record, in the band Happy Endings. Now he is much more a collaborator and friend. So really, those days when we made the Huron record – and I believe the process began in the Fall of 2008 if I’m not mistaken – they all kind of meld together with all the times we’ve spent with Ian, playing, recording, etc. If I had to pinpoint one cool moment it would be Ian cracking open the fire escape door at the old Vibewrangler Studio and putting a mic on the fire escape to record the train going by, a sound which ended up on the end of the record. And then I think the train segueing into the pinball machine sound is a pretty genius move on Ian’s part.

I feel like I have seen you all at my favourite historic Hamilton house party venue, Rocky Saugeen. All of you played there, some of you even lived there. What lessons have you learned from living and hanging out at the most epic party house at the corner of Carling and Macklin streets in Westdale?
Cam: The only time I’ve seen Adam Melnick in formal dress (blue tuxedo) was at the Rocky Saugeen.

Aaron: I don’t think I learned a single damn thing living there. Other than the fact that kids in Hamilton know how to have a great time when the cover charge is optional, they can bring their own weed, and the samosas and beer are a toonie a piece.

Finally, is this upcoming show a one time thing? What’s the future of Huron?
Cam: I never say never, but there’s a good chance it might be. I’ve been having fun at practice though, so depending on everyone else, I’d be up for doing more stuff in the future if the timing works out.

Aaron: I feel the same way, there’s no reason to ever say that this will never happen again, but certainly it will be a long while until it does.

*Special thanks to Jeremy Kemeny for writing this piece!*