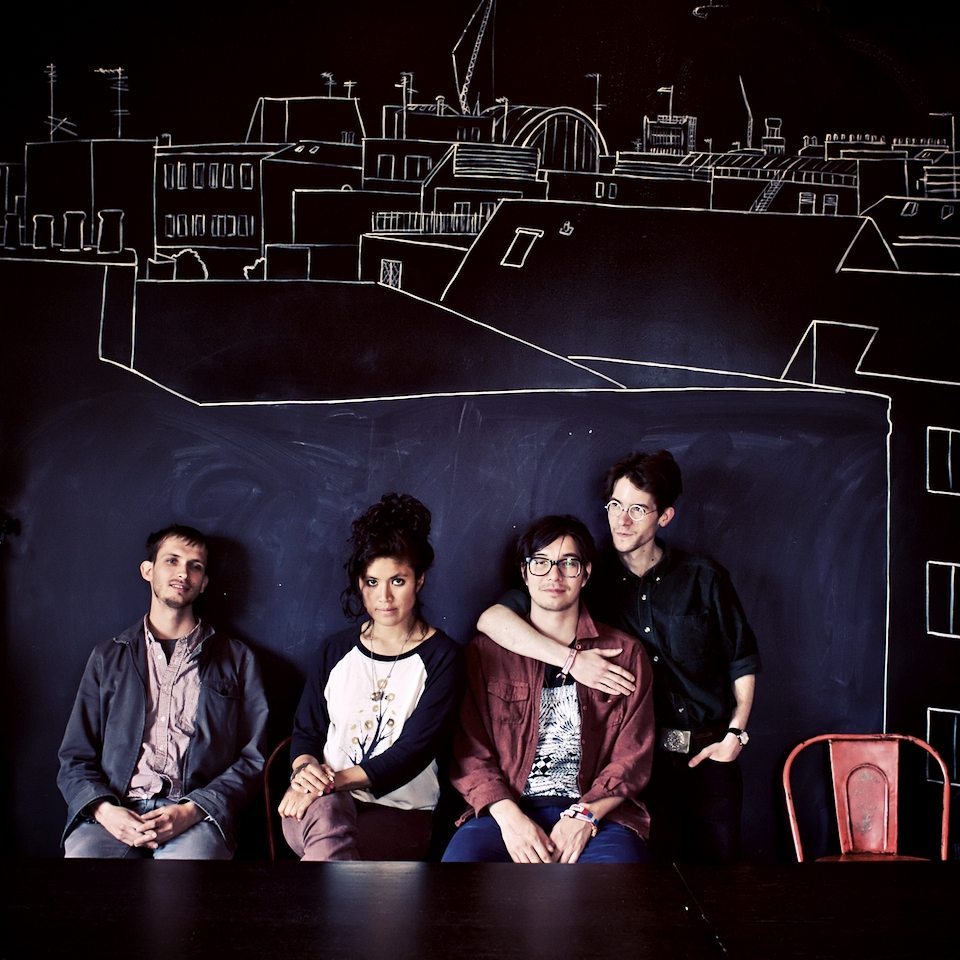 Hooded Fang is a wicked cool band from Toronto. About to release their 3rd LP, the gritty beach-garage Gravez, and down to a solid four-member crew, their sound is deadly and poised to kill.

April (bass and lyrics) and Daniel (voice and composition) are at the heart of Hooded Fang, a bunch of other bands, a record label, and more whimsical indie endeavours. Aside from visiting us at The Casbah on the 30th (details here) to imbue us with our summer soundtrack, they have answered a ton of questions about their indie empire below. So check out what it’s like to be an indie-mogul, play at a space station, how having multiple bands is like ordering pizza, and the secret meaning of Gravez!

Q: Last year at nxne, I saw you perform on a boat. Sea vessels included, what’s the coolest venue you’ve played so far?
APRIL: There is this great DIY venue in Toronto called Soybomb. Most of the room is a skate ramp. Bands play right in the middle of it. Some of the crowd sits at the top.
DANIEL: We also played on an abandoned space shuttle once near Utah. Those astronauts really know how to party. There was an anti gravity room filled with beverages.
APRIL: We’d like to play on a boat again, but in the open air and sea.

Q: I’ve read that you guys put on all-ages shows in Toronto. Is that something you’re still involved in? What do you think it’s like for kids discovering music in 2013?
DANIEL: We haven’t put one on in awhile, but we plan on re-igniting the series soon.
APRIL: The whole thing started because I was mentoring Kristen Sison, who was 17 at the time, at Kapisanan Philippine Centre’s arts and culture immersion program for women. She was complaining that she had to sneak into shows all the time or use a fake ID. Also, Daniel remembers being able to see some wicked acts at Lee’s Palace for some canned food and wanted to bring that scene back.
DANIEL: Kids have youtube these days, of course, but live shows are a completely different beast that everyone should experience. It’s also really important for young teens to have a place where they can use all that energy and confusion.

Q: When you were 18 what type of music were you making? What bands drove you wild?
DANIEL: I don’t remember. Actually, I was heavily into hip hop at the time.
APRIL: Daniel, weren’t you DJing a lot?? Ya, I was heavy into hip hop too. And RnB. I was also friends with a lot of South American immigrants and listened to stuff like La Quiero A Morir. I think I was making raps with my sister about being good and positive and stuff, haha. We did one for the school variety night and had these boys from another school beatbox. I also played Black Bird on the guitar at the show while my sister sang. Also, I was making a lot of cheesy stuff on the acoustic guitar about boys.

Q: You guys have a few other musical projects including Phèdre and Hut. How do you decide which bands to spend time on, or which group gets which idea/song? Do you play favourites?
DANIEL: It’s tough, especially with scheduling. It used to be a lot more carefree, but now we have to actually plan ahead and schedule time to work on certain projects. Hut is a carefree party band, it’s a great release, and we mostly play toronto shows. Phèdre is a studio project, which we hope to get back to playing live with shortly.
APRIL: Each band is a manifestation of some inside part of us. How do you decide when you want to listen to No Bunny or to TLC? When to eat pepperoni pizza or vegetarian coconut stew? In the end, its all us.

Q: In addition to making all of this music, you (April and Daniel) started a record label, Daps Records, in 2008. How do you divide your time between business and music?
DANIEL: We run the label with our manager and friend Ian Chai. He is the real business head between the three of us. At the moment the label is primarily focussing on our own acts, Hooded Fang and Phèdre, and releasing other things sporadically as they come up, but on a more casual basis.
APRIL: Like a psycho-robot.

Q: Why did you decide to start a label rather than releasing only your own music?
DANIEL: The label was started to release our own music, and we wanted people to hear some of the other awesome music that was budding in Toronto as well. There are so many talented people and friends in this city, who will no doubt go on to bigger and better things.

Q: You will be releasing a new LP, Gravez, in just a couple of weeks. The new singles sound incredible and all of our readers should definitely check them out. For those of us who can’t wait until May 28th, how would you describe Gravez as compared to Tosta Mista and Album?
DANIEL: Gravez is a very different album for the first two, and melds aspects of our other projects and influences into Hooded Fang. It is a varied album, with some interesting ideas. It is my personal favourite so far, and translates live with a lot of energy. We are basically a new band, with a solid lineup and we enjoy playing together very much.

Q: What was different in the creative process for Gravez? And the production?
DANIEL: We had a chance to play and flesh out many of the songs live before the final recordings. Some of it was recorded in an actual studio as well, which was a first for us as a band.
APRIL: Ya, all that was a bit different, but mostly it wasn’t that different. Just going with our guts (at) the time.

Q: What does “Gravez” mean?
DANIEL: Gravez is a friend of ours who lives in Mexico. We miss her dearly. She is making a video for a song on the album as we speak, and it will be filmed in the desert out there.
APRIL: What does anything mean?

Thanks guys! Can’t wait for the show!