Catching up with Nathan Lawlr of the Minotaurs 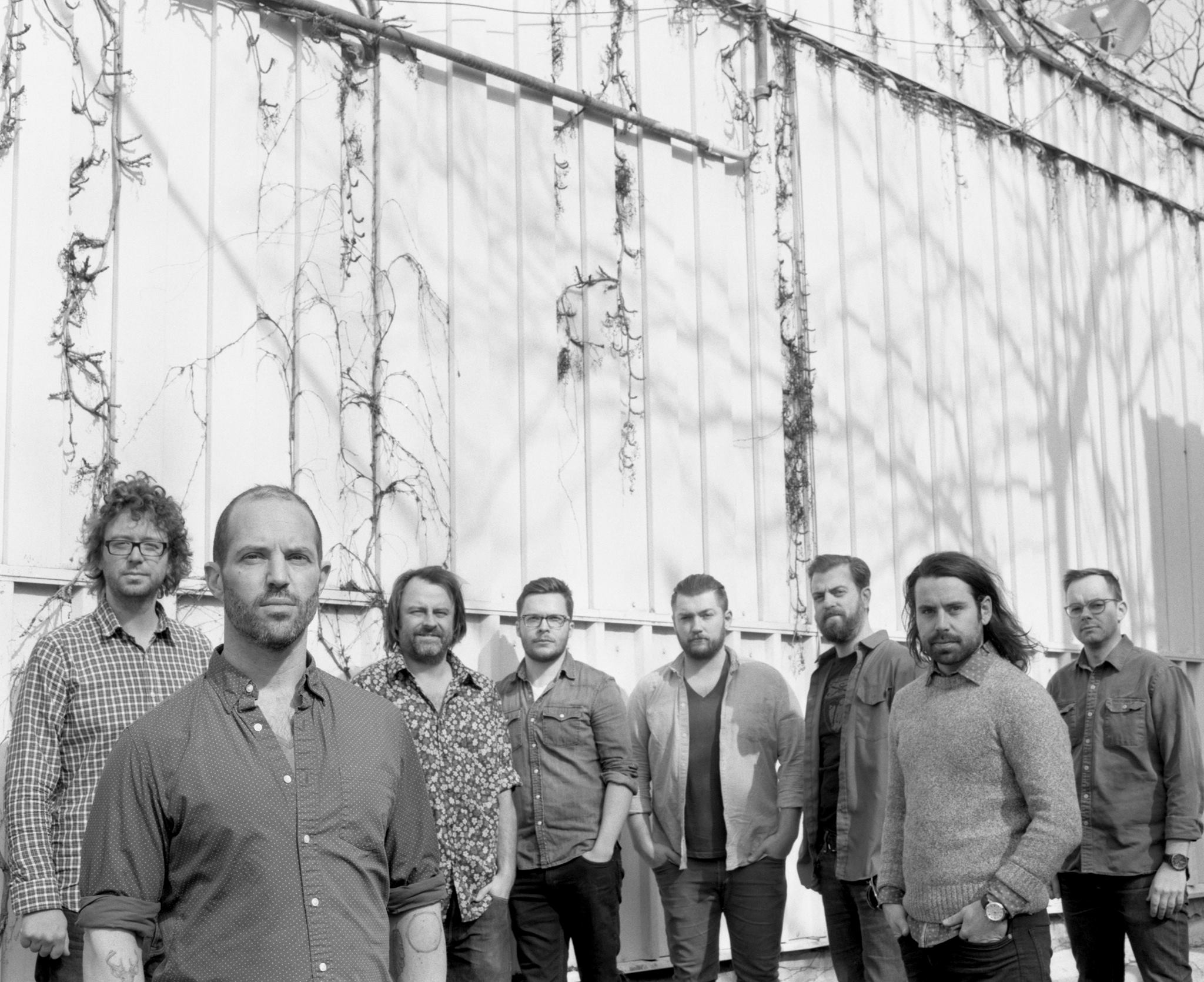 Minotaurs are an 8-piece Afro-Psych band from Guelph, Ontario. They’ve got an amazing style that blends Afro-Psych sounds with elements of jazz, hip-hop, and dance. On top of the great music, they have the intelligent lyrics and the great voice of band leader Nathan Lawlr. Imagine an awesome dance party where the lyrics are as good as the music. That’s what the Minotaurs are all about.

They’ve been around for years and have just released a brand new album, AUM, which tackles political issues and issues of self-expression and spiritualism. Minotaurs are playing in Hamilton tonight (Casbah). Find information about how you can get the new album and information about upcoming shows on their website.

Check out the interview below with Nathan Lawlr and if you want more Minotaurs info you can check out an interview we did a few years ago.

Q – Can you tell us about AUM and how this album came together?
It was a logical progression from the last one. They’re sort of sister albums in a way. I originally started with my singer-songwriter stuff trying to make my folk music more interesting and dance friendly. The sound sort of developed from my love of psychedelic African music and dance music. The genre of African psychedelic dance music is amazing and is a rich area to mine for ideas and inspiration. I wanted my music to have some content and a political message instead of being just like “Get on the dance floor I love you, baby”. With this last album, it was great to explore new ways or doing songs and to embrace an element of improv.

Q – What was it like working with Stuart Boogie from Antibalas?
We invited him up and did some work in the woods in a cottage. Stuart was great to work with and he gave us lots of ideas for our music and also how to work with 8 musicians in a cohesive way.

That’s a great friend to have, the Antibalas are amazing.
Yes, it is, but we also paid him. (laughs)

Q – What’s it like working with 8 people, logistically?
It’s difficult. We’re a big band so it’s expensive to travel and to make things like that happen. It’s also difficult to manage schedules and things like that, as you could imagine. We’ve come a long way, though. In the beginning, it was me doing most things and then the band would come in. We’re a lot more cohesive now, I would say. I’m still the idea generator and the administrator but everyone has figured out how to claim some space for themselves. It’s not always easy in a band of this size. We’re more of a unit than ever before.

Q – What’s it like living in Guelph as a musician?
Guelph is a great town and the artsy reputation is well founded. We’ve got the University here and we’re close to Toronto and so that makes for a pretty healthy arts scene. There is a good balance of people making art and people appreciating and seeing art. We also have a bit of a hippy vibe because of the agriculture side of things. It’s a nice city to make art in.

Q – You’re pretty outspoken politically in your music and online. How do deal with internet arguments and trolls?
I’ve been doing less arguing online these days. I try to respond intelligently or to address their (troll) points intelligently. For whatever reason people feel that they can spew garbage when they’re not having to look at a human face. There are no repercussions online, it doesn’t say much for us.

Q – Do you think that the internet reveals that at our core, without any repercussions, humans are prone to bad behaviour?
No. I think that people are frustrated, angry, unsatisfied with the current power structures and they are expressing that. People can’t really place the blame where it belongs so it comes out like that on social media. The current political system breeds dissatisfaction and disinterest and it affects how we live our lives. When people are venting on Facebook they are voicing that they’re dissatisfied but they can’t really place the blame where it belongs.

Q – Since the most recent American election there has been a noticeable increase in what I call ‘Canadian Smugness’ online. What do you make of this?
Smug is the best word for that. Actually the whole Canada 150 thing has been driving me nuts and it hasn’t even started yet. The thing about the States is that it’s not a new phenomenon; it has happened many times before. These powers are available to our leaders at any time and if the conditions are right they can use them. We’re just purely lucky here in Canada; we’re in the right place at the right time. The smugness is dangerous we’re certainly not untouchable up here, and also there are plenty of places in Canada where things are bad for people. I’ve been disappointed to see how empty Justin Trudeau has been. He hasn’t really accomplished anything and the things he has done have benefited oil companies and big business. I was reading about him asking the Pope for forgiveness in for Canada’s use of Residential Schools and its like ‘Dude, start with yourself’. Even if the Vatican did forgive it wouldn’t change anything. The problem with politics is that people who are awesome and who are capable of great things don’t want to get into politics.

The only real way is to start from scratch. I’m one of those ‘smash the state’ guys, I believe that our institutions were written by and to benefit rich old white men. We need to make a new system that’s an effective and collective way for decision making and power needs to be spread equally. It’s really not working out what we’re doing although it is REALLY working out for some people. Most people are just getting by.

Q – When I interviewed you in 2013 I asked you about the music you were listening to and you told me you don’t listen to any North American music after 1997. I figured that was a joke?
Ha! Yes I was definitely joking when I said that. I listen to all kinds of music. Lately, I’ve been loving KAYTRANADA, for example.

Q – Can you tell us about your new song ‘All Hail‘?
I was working on that song and then Beyonce’s Formation came out and it blew my mind. It inspired me to do something a little different. The song is actually about Justin Trudeau ‘pretty prince with politicians, etc’ I was seething with rage when I wrote that song and I was thinking that women should be in charge. I’m so tired of the whole thing of him saying he’s a feminist – fucking bullshit. All of us should give greater respect for women and not just our mothers and sisters, and the ways that women are connected to us personally. All women.

Q – Can you tell us about your spiritual journey as a musician?
I realised that with having ambition for music, it can be easy to lose track of why you got into it in the first place. There is a lot of rejection and indifference with music these days and you have to find a way to deal with that. The latest album we put out has to do with some of those themes. If there’s a universe out there, then there is a universe in here; it is within all of us. It’s like in Ant-Man when he shrinks down to microscopic levels and he finds there is a whole life system happening there. That’s like us – we need to explore our inner worlds. I’ve realised that I’m working in this band and it’s amazing we make great music and that should be enough for me. Of course, that’s easier said than done.

Q – Do you have any other projects happening right now?
I’m working on doing music and dancing for an upcoming show my friend is putting on. I’m a modern dancer! I still can’t believe I’m really doing it.