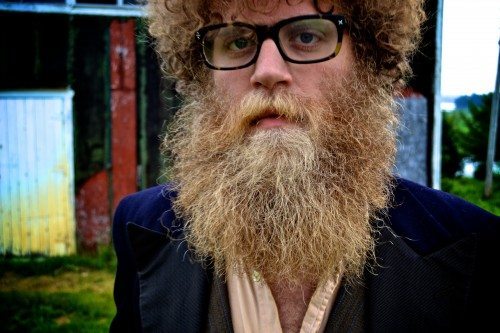 Ben Caplan has a long standing relationship with Hamilton, and he was gracious enough to take some time to answer a few of my questions earlier this week.

Your album, ‘In The Time of The Great Remembering’ has been received very well both at home and internationally. What was the inspiration behind this album?

This album was a collection of songs that I had been working on for years. The newest song on the record was written four or five months before we went into the studio, but the oldest song on the album was started when I was 13, although the lyrics only came years later, and the final arrangement not until the studio. The songs come from a lot of different places. I called the album “in the time of The Great Remembering”   for a couple of reasons. I wanted the title to reflect that these songs all came from a place that was personal, and yet somehow outside of myself. Re-experiencing as opposed to experiencing, but doing so in a very involved way. I also wanted the title to reflect my personal philosophy of hope – that our culture will itself enter into a time of Great Remembering in which we recall more balanced ways of living that have slipped away.

International support for your work has been great for a while, you’ve recently returned from a 54 day tour of Europe. What was the tour like? What are your highlights?

International support has been wonderful. If nothing else ever happens in my career, I will have been blessed to have seen so many beautiful places, met so many wonderful people, and played to such enthusiastic crowds. I am not a rich man, but I have had some wonderfully rich experiences.

This last stint in Europe  tour was amazing. It was my first time actually touring with a full band. I’ve done lots of one-off shows with my band, and even brought them further afield, for example just recently we played as a full band for NXNE, but this last tour was the first time I was on the road for weeks consecutively with a full quartet. There are definitely some major highlights. The first gig was one of them.  We played a sold out venue to hundreds of people on a huge stage in Eindhoven, Netherlands. It was an amazing welcome to Europe.

Walking through the ancient stone streets and canals of Dordrecht before our gig in a former medieval mad-house. Busking in front of the amazingly ornate architecture of the Pavilion inBrighton,UK. Sleeping in a 900-year-old farm house outside of  Lessen,Belgium. Meeting amazing locals inKrakow, Poland, and being fed drinks until all reason was gone. There were amazing experiences and fond memories of almost every place we went.

Do you have a favorite place to play in Europe?

That’s a really tough question. Every place is so different. There are different things I like about different places.Rotterdam is an amazing city that I love to spend time in, and the venue is great, but I might prefer the venue I played in Eindhoven. The crowd in Deventer was probably the most enthusiastic I’ve ever met. But the folks in Ghent have become dear friends that I look forward to seeing when I get the chance. Each city offers an amazing array of good people, architecture, cultural differences, and really different venues. I try to just appreciate each experience as fully as possible without trying to compare it to something else. If I had to pick a favourite, it would just be playing shows.

Tell us about your experience playing SXSW this year? What was the best show you saw?

SXSW in Austin, Texas is insanity. Sheer madness. It’s really not my kind of scene. Such an insane glut of corporate sponsorship, red meat, and booze. Consume, Consume, Consume!!! It was amazing to have so many bands in one place, but I arrived in Austin after 3 weeks solid on the road with a trio, and just before that I had had two days off, and before that another tour. I wasn’t really that excited about being at concerts. I was a little bit burnt out. But I did catch a set by hometown heroes The Arkells. I hadn’t seen them in a really long time, but it was wonderful to see them in that context. They blew the roof off the Canada House and showed every person in that room exactly why they do so well. That band deserves everything that comes to them, and more!

You did a residence at the Casbah this past winter and held regular shows on your own and with friends.  Tell us about your relationship with Hamilton.

I love Hamilton. I was born in Hamilton and spent my first 18 years there. I think it’s a great city. When I was living in Hamlton, I did used to poke fun at it from time to time, but then I moved away and had to hear other people talking nasty about our fair city.  I realized that these people had no idea how amazing Hamilton is under some of that grit. It’s amazing to me how much people’s perception of the city has changed over the last few years with the ever growing arts scene in the city. I think the city’s image is constantly improving, and I love coming back to visit. Though I’ve made Halifax my home, Hamilton will always hold a special place in my heart.

What are you listening to these days? Any recommendations?

I just recently picked up the newest Geoff Berner album. He’s a great songwriter from Vancouver who has been an important influence on me. I also love Wax Mannequin and have been re-discovering him recently after a few years of not listening so much. His newest album is awesome, but the back catalogue is fantastic too.  Bob Wiseman just sort of released an amazing new album called Giulietta Massina at the Oscars Crying. It’s not officially out yet, but you can find it on Bandcamp It’s well worth picking up. I’m also a big fan of The Burning Hell. Their album Flux Capacitor might as well be a greatest hits album. It’s damn fine.

What is next for Ben Caplan and the Casual smokers?

A lot is on the horizon. I’ll be touring around Southern and Eastern Ontario and on through Quebec for the rest of June, and then the summer is a bunch of festivals around the East Coast and a quick trip to the US for Summerfest in Milwaukee. I’ll also be popping over to Germanyfor the Tollwood festival in Munich in July. Come September,  I’ll be doing another two months of touring in Europe, and then back home in time to play a show with the Nova Scotia Symphony. Exciting! After that, I’ll be focused on finishing up the songs for a new release. I am already writing the next album and have some songs in my back pocket that I may be trying out on the road. We’ll probably be in the studio by February and will hopefully have the album ready for you to listen to by next summer. Oh, and we’re making a music video over the summer too. So it’s busy!

Thanks, Biljana!
Thanks a lot, Ben!