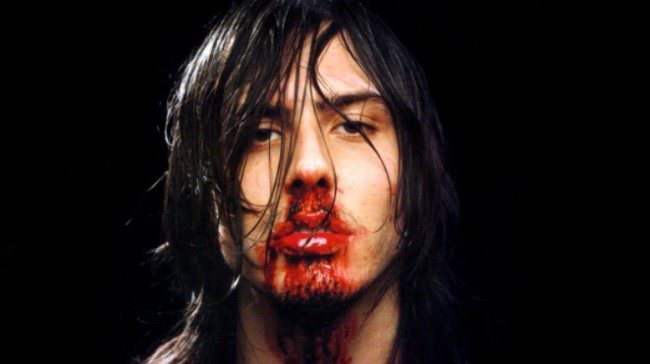 Hamilton is Andrew’s only Canadian stop on this tour, and I was beyond excited when the opportunity for an interview was presented.  It is difficult to come up with questions that do justice covering the wide rage of interests and jobs that Andrew W.K. is involved in – the man is busy! A game of 21 Questions seemed like the perfect approach. Andrew was really friendly and nice, and was a good sport answering all of my questions. His positivity is infectious and I am even more excited for the show since speaking to him.

1) Tell us about your Keyboard Human Party Machine tour? We are so excited to have you in Hamilton!
Thank you! I am excited to come and party with you guys! I actually came up with this keyboard style show while I was in Canada, and I think I’ve done 2-3 of these kinds of shows up there. Hamilton is my only Canadian stop this time around, for this tour.

2) You seem like a really positive person, Andrew, what is the secret to your positivity and constant good vibes?
It helps to have my work dedicated to being cheerful and partying. All of this keeps me really humble and it keeps me going. Human beings need something to believe in to lift them up, and it is my mission to help people appreciate life and have a good time.

3) Do you listen to anything on the way to a party to get ready? Something to get psyched?
I tend to listen Napalm Death’s, “Harmony Corruption” – I’ve probably listened to that over 100 times and I never burn out on it. I can just think about that and I get excited. But really, it can be anything and it doesn’t always end up being high tempo party jams. I like anything that brings across an intense feeling.

4) Is there a song you keep up your sleeve to play when you need to turn a party around if things are getting stale? What’s a sure-fire party starter?
Chic have that power  – their music always gets me going and they bring a serious level of excitement. David Guetta has a song called, “Grrr”, that is just mind bending. That’s a party starter, for sure.

5) Have you picked up any interesting party tips from other countries while touring?
I don’t know about any specific, ‘tips’, but I have learned that partying is an international language. Like smiling.  Partying is the coolest way to communicate. I’ve also learned that everyone has a word for ‘cheers’. I like the UK use of ‘cheers’ – they communicate everything with that word. It’s awesome.

6) Do you have any hangover tips for us?
Just keep moving! When you’re hungover you want to lay in bed, but you should do the opposite. Move around and go about your day, let your body metabolize the alcohol faster. Also – drink water before bed if you’ve been drinking. 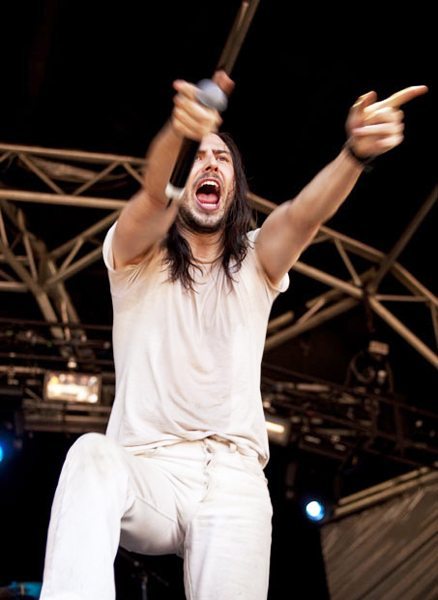 7) Do you workout? How do you stay in such good party shape all the time?
Well, partying burns a lot of calories. Also, my wife is an athlete, and being around her has been great for my general health. She works out for the both of us.

8) Any tips for getting blood out of white T shirts?
Don’t wash them too often. I’ve tried bleaching a few shirts and the bleach makes them degrade quickly. I am proud of my stains – the white T-Shirt is a canvas for blood, feces, and other bodily fluids. It is a hard partying badge that I wear with honour.

9) Can you tell us about your special relationship with Japan?
I first went to Japan with my family when I was 13 years old. My dad was teaching English there, so the whole family went for a little bit. I fell in love immediately, and just loved all of the strange video games we didn’t have in the U.S. As an adult, I’ve played there many times and I’ve always really liked it. The people at Universal music, Japan, have been really great to me and it is through them that I recorded, “The Japan Covers” album. It was my tribute to the people of Japan who have been so great to me.

10) Can you recommend any J-Pop groups for us to check out?
You should check out the group, “Mr. Children”. Also, “Greeeen”, they are a very mysterious group. All of the members wear masks and I’ve heard that they are all dentists. A very cool group that you should check out is, “Babymetal”. They are an all female JPop group who play death metal in an incredibly intense and sincere way. They are amazing.

11) How did you get introduced to the world of Bronies? (Read about that, here)
I was invited to the ‘My Little Pony: Friendship is Magic’ conference by the organizer, and I was just amazed and enchanted by the experience. It was intense and life changing for me. I was always aware of the My Little Pony show as a kid and I always thought it was fantastic. I love what these people are doing, how subversive they are, and everything about them. It is a really powerful movement – why should playing be just for kids? It opened my eyes. I love it when people teach me about new things.

I’ve adopted the character, Pinkie Pie, as my Brony alter ego. I was told by many people that Pinkie Pie reminded them of me, and after I looked into that I felt a connection.

12) Will we ever have an Andrew W.K con, or fest, something like the Gathering of the Juggalos but a bit more positive?
That is a fantastic idea. Thank you! I’ve definitely thought about it. We’ll see.. if people will come,  I will do it. Maybe we could even have it in Hamilton? 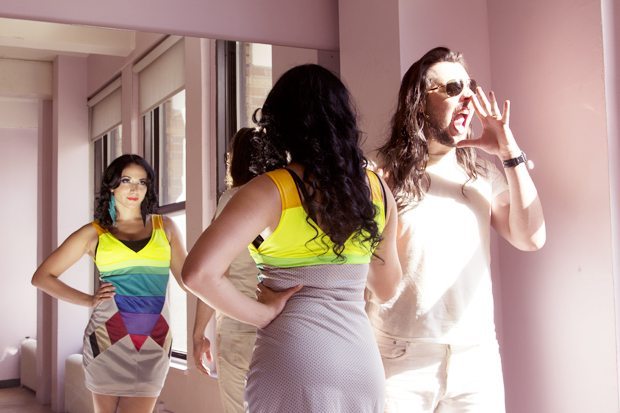 13) You’ve been doing some motivational speaking, is there anyone that you look up to for advice? Do you have a guru or someone you look to for guidance?
I always look to my mom and dad – they created me. I also look to my brother, and my wonderful wife Cherie Lily. Ideally I gather inspiration and advice from everything and everyone in the whole world.  Even the people we don’t see often occupy our psychic space and we feel an interaction with these people. Sometimes I feel that with people I’ve never met. You can’t always chose who will influence you.

14) Your trip to Bahrain as a cultural ambassador was canceled, yet, Denis Rodman still go to go to North Korea. What do you make of this?
Oh, yeah. I saw some photos of that online. I think that Denis Rodman is fantastic. I’ve got a huge admiration for him that all started back when he was playing for the Pistons. He was very exciting for basketball. I really admired how bold, courageous, he was. His style and vision were totally different than everything else that was going on in basketball, and in entertainment in general.

15) How does it feel to represent Fresh and Sexy intimate wipes?
Ahh, the sex wipes. I honestly feel like this is the greatest highpoint of my career and life, so far. It’s been a dream of mine for a long time to be a part of a project like this one. I never thought I would be asked to be associated with a product like this one. The entire marketing team has been so brave with their vision, and for allowing me to be a part of this. I really admire their vision and their bravery.
To represent a box that looks so beautiful means a lot to me. I am a pretty filthy individual, but you can bet I’m clean where it counts and when it counts the most.

16) Speaking of intimate encounters – what makes a good sex soundtrack? Music or no music?
I’d say that 93% of the time I like no music. I like to hear all the noises that come with the activity. For the times that I’ve listened to music it has often been Led Zeppelin I – side 2. That is really passionate music, for sex soundtrack purposes, or otherwise. 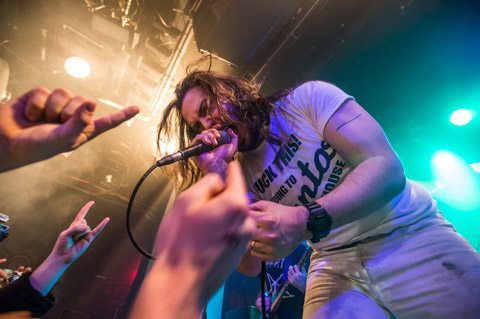 17) You helped David Blane with a magic trick a little while ago by playing Party Hard directly into him –  what was that like?
He is a true magician and a legendary New Yorker – it was an honour to work with him. That was one of the most memorable things I’ve been involved with. I remember the days we worked on that it was pouring rain, and everything was soaked. It made the whole electrocution thing so much more stressful. My keyboard was connected to David and I played, ‘Party Hard’, literally through his body. I hope nobody else ever experiences my music like that – David is a professional. He does these large scale performances that are so hard to understand and wrap your mind around, and he pulls them off so effortlessly.  It was great.

18)  You are joining Marky Ramone on tour as a part of, Blitzkrieg, what has this experience been like?
I’m in a daze! I am absolutely speechless about it.  It’s like an embarrassment of riches. To get the chance to play the greatest music ever written, with the greatest band ever is just such a dream come true! I can’t believe it.  It is mind blowing to me that I was even asked – I mean, they approached me! I feel as though I didn’t even really  make the decision to be a part of this – it was offered to me and now I’m doing it. It is powerful how life works sometimes.

Those guys have been so nice to me and we’ve been having a great time so far. I’m jut super excited about all this.

19) Are there any other musical titans you would like to play or collaborate with?
Yes, but I don’t like to talk about wishes and big dreams. Let’s just leave it for the universe to make it happen. Sometimes when you keep it inside and project your intent into the Universe things can really happen.

20) What are you listening to these days? Any recommendations?
Aleister X has been really exciting to me lately, his EP and his mixtapes have all been masterful. He is very prolific with his work.
Also, my wife Cherie Lily has a new EP out called, “Dripping Wet” that is really great and high energy.