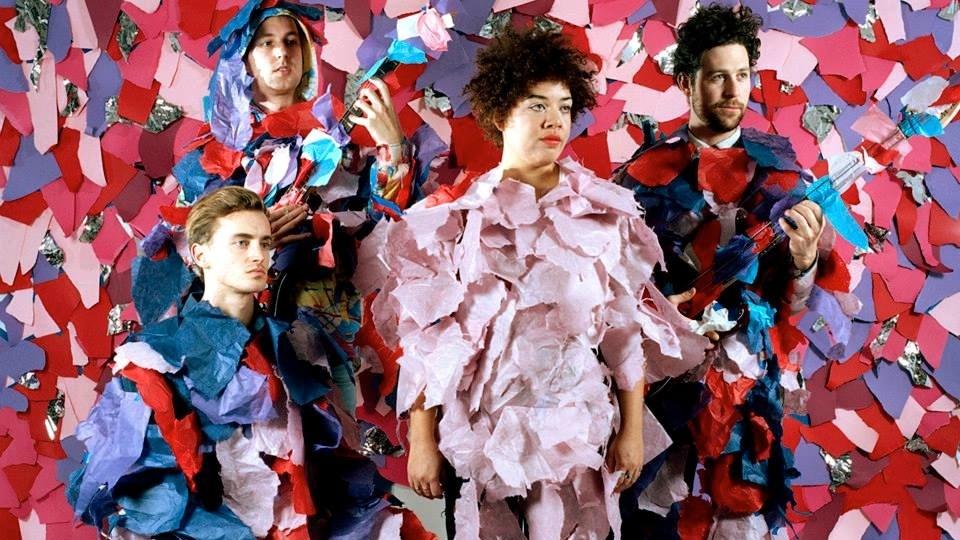 An interview with Weaves

Toronto’s Weaves is the new project of Jasmyn Burke and Morgan Waters, with Zach Bines, and Spencer Cole. Group leaders, and co-song writers Jasmyn and and Morgan have both had success with previous musical projects. Jasmyn was in the critically acclaimed slack-pop trio RatTail, and Morgan was in a pop band Sweet Thing.

These two have combined musical forces to pump some of the best new music coming out of Toronto. They’re giving us r’n’b melodies, with weirdo shoe-gaze riffs, and clever lyrics that stick with you. They’re great and if you haven’t checked out the latest album you really should.

We caught up with Morgan to learn more about Weaves.

Q –  Congrats on the EP – it is seriously good.  Can you tell us a bit about how the EP came together?
Jas and I have been carving out our likes and dislikes into buggy Garageband files and then pushing them till they (or we) break. Our influences go into the pot (smoke) and we stir it around till it makes us laugh and we go “what is this music?”

Q – What’s it like sharing the writing with another person? How do you combine two creative minds?
Jas is the heart, I’m the brain. We trade roles occasionally because that’s life. A shared love for exploring the unknown and exaggerating our little ideas till the music makes us feel BIG.

Q – Your tracks are really solid – but in a strange way. It’s all good, but it’s hard to pin point and it seems to be a wild trip down a musical wonderland. What were you guys listening to while making this beast?
Oh god, I don’t know. So much stuff. Jasmyn has a Bruno Mars backpack, so that’s always there.

Q – What’s it like being in a band in Toronto today, in 2014? From the outside it seems like there are a lot of cool labels and collectives doing neat stuff.. and there are so many genres and different sounds happening. I’m wondering, what is that like from the inside?
It’s the same as the outside, it’s yourself VS yourself. No scene is going to help you overcome yourself, because yourself is an asshole.

No scene is going to help you overcome yourself, because yourself is an asshole.

Q – What’s the best show you personally attended in the last little while?
Ariel Pink at Lee’s Palace was great. Odonis Odonis at Cinecycle the other night was driving the people nuts, like that party scene in Jacob’s Ladder where Tim Robbin’s girlfriend is grinding up on that demon’s tail.

Q – You guys were at SXSW this year – – how was your experience? Also – what’s the best thing you ate while down there? People always say that the food is really good
Tacos tacos tacos. Chips and salsa.

Q – What are you listening to these days? Can you recommend a track or an artist that you’re into?
Two of Canada’s best artists just released records the same day as us, Mac Demarco and Timber Timbre. I’m really into this as well:

That’s what it’s all about, in a way.

(That is wonderful, thanks for bringing that girl into our lives.)

Q – What do you guys have planned for the rest of the year, musically speaking? Anything on the books for the summer?
We’re gonna sweat it out and try to up our game and destroy the competition, but in a super passive aggressive, gender/race neutral kind of way.