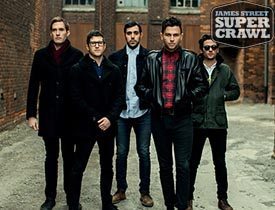 An Interview with The Arkells

The Arkells don’t really need an introduction around these parts, they are easily one of the most successful bands to come out of Hamilton in recent memory. Canadian indie rock has a certain sound and that sound sounds a lot like the Arkells. They write polished pop / indie rock songs that pay tribute to Hamilton, and songs that focus on love and relationships that anyone can relate to.  The new album, High Noon is fantastic and has certainly had a lot of time to shine on our ipods. We caught up with Max while the band was driving around on the East Coast, earlier this week.

Q –  Congratulations on the success of High Noon – It’s gotten really good reviews and it is a really solid album! Can you tell us a bit about the writing process and what inspired the album?
Thanks a lot, glad you like it. We’re all massive music fans and we are always listening to new music, or re-discovering old things. It all gets thrown into the pot when we meet up and jam and one way, or another, those inspirations have a way of making it into songs. Sometimes in obvious ways. Lyrically, I write about what I know, things like Hamilton, relationships, girlfriends, tour, etc.

Q –  I heard that you guys worked on the album at the old Spice Factory building on Hughston. There are many stories online (and in real life) about that place being haunted. I’ve certainly felt creepy in there a few times. Did you have any paranormal sightings / experiences? What was the vibe like in there?
We wrote most of it there, actually. We got in there in April while some of the building was under construction. It was great to have a home base where we could come in like 9-5 and work on music. I don’t know about the ghosts, though. I don’t really believe in that, although I have heard the stories. We got a nice spot with natural light and AC, so we were feeling fresh all summer long.

Q –  “Ticats are Hummin’” has become a TiCats anthem! It is a great track and the video for it is awesome. Can you tell us a bit about your connection to the TiCats and why you were moved to write this track?
We were lucky enough to be asked and we couldn’t turn it down. I have a policy where I will say yes to a good cause if it is within 15 blocks of my house. We’ve always been big sports fans. Sports are a welcome distraction while we are on tour.

We’ve never been asked to write about something specific like this but the song came together faster than our songs do. There is a lot of imagery, as well as many characters and situations that are associated with attending a TiCats game  – there was a lot of inspiration there. It was a fun project and we are very happy to be involved.

Q –  What are some of your musical influences?
My dad was a radio DJ in Detroit while he was in University and he had a tone of vinyl at home all the time. We had a lot of The Beatles, and Motown records. Beatles and Motown are what sticks with me the most and those two form the basic template of a pop song. It was good a good education to have that music at home.

Q –  Do you guys do Karaoke? What do you like to sing?
I’m not really into Karaoke. I guess if I had to do something it would be a duet, like “Don’t go breaking my heart”. The key is important when you sing and a lot of those systems are calibrated with odd keys that don’t suit singing. You can be a great singer and still suck at Karaoke because they keys are all off.

Q –  You guys have done a lot of touring and have gotten to play in some pretty amazing places, what other city compares to Hamilton? Have you ever been somewhere that’s reminded you of home for whatever reason?
Pittsburgh stands out as a place that reminds me of Hamilton. That town was so different 15 years ago and they’ve gone through a huge renaissance and today are something like the most livable city in the states. It is a working class town with a good arts community and it reminds me of home. I guess any of those cities in the rust belt have a bit of Hamilton in them. Peterborough is another one.

Q –  What are you listening to lately? Can you recommend a track?
The new Spoon record is killer. I also love the new Ryan Adams. The new U2 that was free on iTunes is pretty U-2-ey. The new Jenny Lewis is great, too.

Q –  Who are you looking forward to seeing at Supercrawl?
So many bands! Basically everyone on the Arkells / TD stage! Harlan Pepper, Dity Nil, Charles Bradley, Jeremy Fisher, Kevin Drew.. so many people.