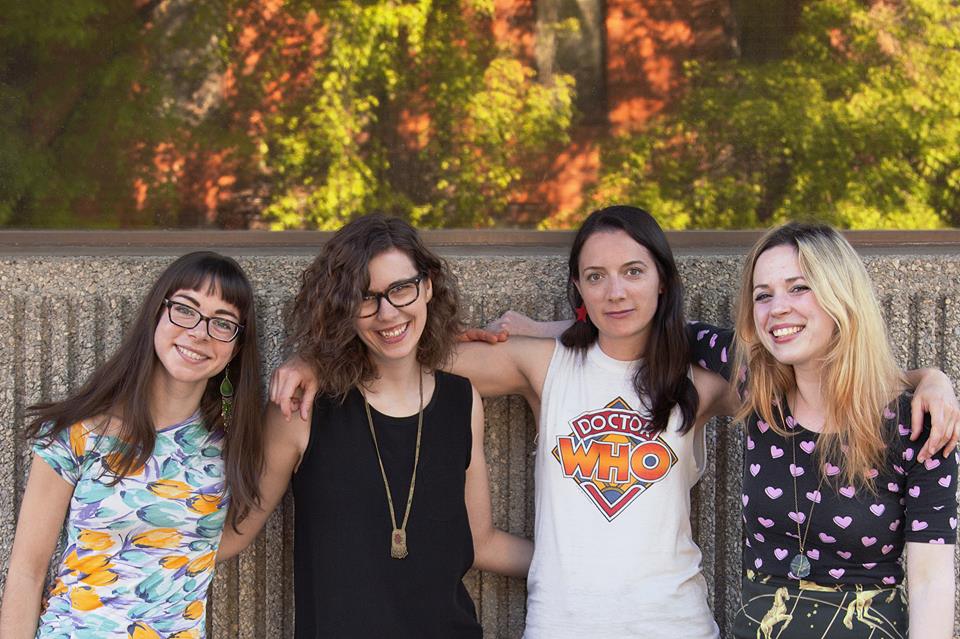 Toronto’s Sheezer is recognized as one of the premiere Weezer cover bands. Sheezer is made up of Canadian rock royalty:  Dana Snell (Drums), Laura Barrett (Bass), Alysha Haugen (Guitar), and Robin Hatch (Keys, Guitar, Harmonica). That is a lot of talent in one cover band. Sheezer only plays songs from The Blue Album, and Pinkerton, and they say they have no plans to change that. The crowds come back again and again to hear their favourite tracks and nobody seems to mind the two album focus.

Q – Can you tell us about your decision to start a Weezer cover band?
Forming a Weezer cover band wasn’t very calculated; it was more of a spur-of-the-moment decision that happened when Laura and I were driving home from a gig listening to the Blue Album. But if we had planned it, I don’t think we could have picked a better band to cover. The songs are hella fun to play, the lyrics matter to people and Weezer fans are the most devoted fans around. People really love this music, and enough time has passed since Blue and Pinkerton came out that this also has a nostalgia factor for people who, like me, were around when they came out. I was in high school when the Blue Album came out and in my first year of University when Pinkerton came out, so they definitely meant a lot to me. That being said, younger members of the band like Robin were still into Weezer (she connected with other fans on a Weezer message board). When we play shows, there’s lots of young fans there that were probably little kids when the albums came out, yet they still love Weezer and know every word to the songs. The music is timeless.

Q – You play songs from The Blue Album, and Pinkerton. Are there any plans to expand to later material?
No, we’ll stick to those two.

Q – What’s your favourite song to play?
It always changes, but right now it’s a three-horse race between Tired of Sex, Jaimie and Say it Ain’t So.

Q – What can we do to get you on the Weezer Cruise?
Oh man, I don’t know. Start a petition or something. We really want to get on that cruise.

Q – What are you listening to these days? Can you recommend a track?
It takes me awhile to get new records, so I’m a bit behind the times, but right now I’m listening to Mac Demarco’s Salad Days and the new Blonde Redhead. For Salad Days, I like Blue Boy.

Q – What do you have planned for fall / winter?
After these Halloween shows we’ll probably chill out for a bit. We try not to play too often because we want to keep our shows special. But gigs always pop up, so who knows? Or maybe we’ll get around to that original band we’ve been talking about for the past two years…

Q –  Just wondering – what would you call a .. Third Eye Blind cover band? (That’s my often-mocked favourite band from my teens.)
I would call it Two Eyes Sighted.