An interview with Scott Orr

Scott Orr is a passionate Hamiltonian and a fantastic singer songwriter. Scott released his first album in 2003 and he hasn’t slowed down since. Winning Hamilton Music Awards, being featured on Degrassi (what up, Canadiana!) and crafting other music through his label Other Songs Co.  Scott’s work ethic and DIY approach to music is admirable.

Scott’s latest release, A Long Life, is a hollowed out, mellow shift in his music. The songs are lingering and beautiful.  We caught up with Scott to learn more about his music and the label.  Catch Scott at The Casbah tonight, and around town in the future. Check out our events page for the details.

Q – Can you tell us a bit about how A Long Life came together?
I started writing, A Long Life, in the fall of 2012 but it wasn’t until I started recording in March 2013 that I came up with the songs I really liked. It was important to me to write songs that were better and more evolved than my previous stuff.  I wrote and recorded in March / April and the record was done in July.

Q – Did you have a specific sound in mind when you were putting A Long Life together?
Yes, at some point I get a vision for what I want the record to sound like. Sonically, and lyrically, I try to theme my music towards something specific. Usually there is a sound you want to hear. A certain tone. I knew I wanted this to be mellow and empty, and to have a lot of space. There was this objective I had in my mind to move away from folk music, which is the type of music I started making back in the early 2000s.  There were good catchy songs that I wrote that I excluded from the album because they just didn’t fit in the image I had in my mind. There are also songs on the record that I think people may skip over initially, like the instrumental track, but that’s alright. It was important for me to get that track on there.

Q – I find folk as a label for music interesting.  Many artists labeled as folk sound nothing like one another. When I ask folk musicians what they think of the label many reject it, or call into question what it really means. Where do you stand on this?
I think that it is just a trigger word that music writers, and musicians, use to describe music. Terms like indie-folk, folk-rock, pop-folk get thrown around. I think that the term folk has replaced singer-song writer as a genre. Ten years ago if you were to describe someone as a singer-song writer you would think of someone singing with an acoustic guitar. I mean, ten years ago guys like John Mayer and Jason Mraz were  considered singer-songwriters.

I think that it is supposed to let you know that it is acoustic music. I don’t think it has to do with political lyrics or trying to copy Bob Dylan.  You know that popular Mumford and Sons sound that’s around these days? I think that that’s the sound everyone is trying to describe these days but they can’t find the words for it. Indie-folk? I don’t know.

Q – We could say the same thing about the Indie label that gets thrown around.
Yeah, what does indie really mean? Bands like Fleet Foxes, and Arcade Fire, are called indie these days and those are huge bands. At some point you can’t be indie anymore. Cut From Steel is indie.

Yeah. Until I start making piles of cash.
To me, indie means no boundaries. No rules. If you were to say indie folk that, to me, means its a singer song writer but they’ve thrown in synths, or old timey instruments for example. Indie, to me, means independent of – rules, anyone breathing down your neck. If you remember in the ’90s the label alternative was thrown around a lot. Bands like Counting Crowd and Barenaked Ladies were called alternative. They weren’t pop, or rock. So they were alternative.  The ’90s term coffee house also doesn’t exist anymore.

I guess what we can gather from all this is that we don’t have the language to describe music properly. Certain terms exist in a certain time and then we move along to something else.
That’s it. I’m fine with being labeled folk. I write all my songs with an acoustic guitar. Although I don’t think guys like John Prine would ever consider me folk. 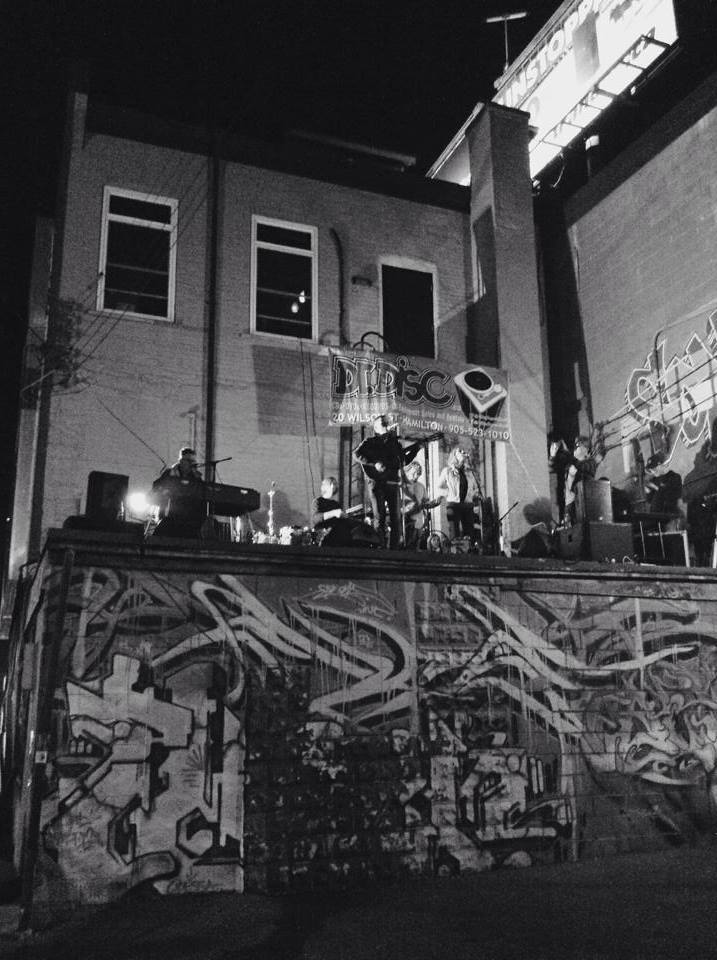 Q – Tell us a bit about how you got into music.
I played guitar and drums as a kid, and I was in some bands in high school. I grew up in a small farm town where everyone played hockey. There weren’t many  bands around so I mostly played on my own.  My tipping point was playing this coffee house at some point. I remember writing a love song specifically for that night and I got a huge reaction from the crowd.  I also did a cover of John Mayor’s, Your Body is a Wonderland, that also went over really well.  After that I started writing songs more seriously. I printed my first CD in 2003, and then got a Factor grant after that for my next release.

Q – What was it like getting into the music scene when you first started?
I thought it was an old boys club at first. It was hard to penetrate, and I thought people were mean. Looking back, I realize I was just too inexperienced. And maybe I wasn’t very good. I’m sure that young people starting out today feel the same way, too. It’s hard when you’re new, but you have to pay your dues and work hard for a long time to be noticed and to headline clubs. Looking back there was nothing wrong with the music scene or the people. At all. It was me, I was the one with the problem. It all has to do with hard work and sticking with it. Some people get lucky and blow up right away. Although most people have been in 3 or 4 bands and are in their thirties before they get real attention.

I thought it was an old boys club at first. It was hard to penetrate, and I thought people were mean. Looking back, I realize I was just too inexperienced. And maybe I wasn’t as good as I thought I was.

Q – How did you get started with your label, Other Songs Music Co?
When I released my EP in 2005 I actually just wrote “Other Songs Music” on it to seem legitimate. That was it – I really just made it up! It was a bit of a personal joke, and I figured nobody would ask about it. I mean, it didn’t even have a website. I started recording my friends bands in my basement and eventually there was enough of us and we shared common fans so we thought “let’s start a label”. That was it.  It all snow balled and we released 12 albums in our first year! Since then we’ve learned to do less records per year and give them all more time and more attention.

Q – How did you learn to do all of this?
I learned by trying things and learning on the go.  It all started when I released my first record and I had to figure out where to get it manufactured, how to make posters, tshirts, websites, buttons, etc. Over the years I started helping my friends with quotes, price points, quality levels, and all of that. I really just figured it out on my own through doing it. I approached it economically and I still find places that give you the best deal.  CDs don’t sell like they used to and most new musicians don’t have a tone of money to spend making the album. I figured out who was out there to make money off the backs of artists and who was there to rip you off.  A lot of companies just exist to rip off passionate eager people getting into the business. Luckily we don’t have too many of those in Hamilton.

Q – You were a big hit at the Dr. Disc rooftop show at the October Art Crawl. What was that like?
It was such an amazing night. They usually book harder, louder, bands so I felt like a bit of an underdog going in. There weren’t many people there when we started and at some point I looked up and saw people all the way out to the next parking lot. It was so cool!  I had such a good time and I really love what Dr. Disc is doing with that series.

Q – The real questions is how did you get all of those instruments up the tiny stairs and on to that roof?
It was tough! We use an old piano and it takes two grown men struggling to move it anywhere. Somehow every gig is up stairs! Come help us move it next time and you can find out for yourself.

I think I’ll just watch from a distance. Thanks, Scott!