An Interview with Persons

If you’re the sort of person who regularly goes out to shows in Hamilton there’s a good chance you’ve witnessed a Persons (formerly Nick Persons) show at some point. This group made up of artists and musicians (Jackson Darby, Benita Whyte, Katie McDonald, Sam Rosenberg (DJ Choozey) moved to Hamilton a few years ago and have made a real mark on the city in a relatively short amount of time. Hailing from Montreal this group moved to Hamilton, started Casino art space, and began performing music.

To understand Persons you really need to see them live and witness the sort of show that is really hard do describe. It’s hectic, weird, confusing, aggressive, hypnotic, and really entertaining. You won’t be checking your phone or wondering when the next break is. They are captivating live and their music is really great as well. Combining elements of hip hop, disco, pop, and soul, the music layers vocals and beats in a great way.

It’s really important for Hamilton to have people like Persons performing and creating art and supporting artists – as gentrification chugs along things tend to get more polished, safe, and boring. We need artists like this to keep things interesting and to push back against the avalanche of lame.

Persons put out a new album recently that you can download on Bandcamp and are about to embark on a Southern Ontario / Quebec tour. Knowing very little about the background of this group I met up with Jackson and Katie to learn more.

Q – Can you tell us a bit about how Persons came to be?
Jackson – I know it seems totally confusing. It started as just me, many years ago in Montreal. It was originally me making instrumental music and then i started incorporating affected vocals into it. Eventually when I started playing live I added a drummer (Sam) who became a permanent fixture and it slowly evolved from there. When we moved form Montreal to Hamilton we added Katie and Bonita and Danielle. They started off just dancing and it grew from there.

I really wanted to create a spectacle experience. I was tired of watching bands who I thought were boring on stage. Slowly on a show by show basis the people that danced did more vocals. Our newest stuff organically became more of a union – wasn’t about the character any more, now its about many characters. With this last album we dropped the ‘Nick’ and now its just Persons to be all encompassing of all of us and not gender specific. It’s about 4 characters.

Katie – I think you can definitely notice a change in the music. When I first met Jackson he was making really weird and different stuff and with time I think its become a bit more accessible. I think its smoothed out.

Jackson – Somehow its more accessible. I think thats a backwards progression form a lot of people who start off trying to be accessible and then get weird.. we went the other way. It wasn’t conscious, that change.

Q – Where did the name Nick Persons come from?
Jackson – It’s Based off Ice Cube’s character from “Are We There Yet?”. It represents the last step in his downwards progression from hardcore gangster rapper to a children’s star. He’s sort of playing a caricature of himself these days. I took that and the unbalance of extremes and drew my own parallels to my own life I guess.. i ran with that. I think the concept now is not really relevant to the music anymore, but the name stuck.

Q – What about the spooky voice we hear on the tracks?
Jackson – That’s my character – the voice of Nick Persons. Once I started doing vocals it was always like that. It stemmed from me feeling self conscious about the sound of my voice. When I was a teen I used to rap but I never felt comfortable with the sound of my voice and so I decided to fuck it all up. Some people really don’t like it. It’s less abrasive now than it used to be and the music isn’t as focused on my voice because we have more vocalists. It makes the music more accessible.

Q – How did your latest album come together?
Jackson – It was a continuation of what we’ve been doing but midway through making it we decided that it would be the first Persons album. It was organically happening with Sam Bonita and Katie having way more presence on the recordings. Other than that it was a continuation of a similar process. Becky Katz is on it and Eschaton. As the project evolved we just happened to find people in the community that could step in (horns, vocals, etc.) This is the 5th album – 4 were as Nick Persons. It’s all on Bandcamp.

Q – What are some of your musical inspirations? Where does the Disco vibe come from?Jackson – I was primarily interested in hip hop when I was younger. As I got more actively interested in music I got into the music that hip hop was sampling. That’s how it started and so with that came a lot of jazz, soul, rnb, and disco. Disco breaks are the foundation of early hip hop music. I DJ a lot as well and I progressed from playing mostly hip hop records to disco when I DJ. It just happens that the records i was buying were mostly Disco and you can hear more electronic and house and techno influences in later stuff and thats because of my evolved interest from disco into those derivative genres.

Q – Your live shows are incredible. What makes for a good live show in your opinion?
Jackson – For me I want to see something different. I want to see people actively putting thought into what they are gonna do on stage. Especially with electronic music when people aren’t playing instruments per say, you can do a lot more. For us it was like ‘there are 4 of us on stage, 3 of us aren’t playing instruments all the time… we are capable of doing other stuff –  so we do. Obviously theres a lot of dancing. We plan new media interactive stuff and playing with peoples perceptions of time and space and stuff.

Q – You think about this a lot?
Jackson – Yes, a lot. That’s what the majority of our band practices are about – practicing and planning for live shows. How are we gonna interact and perform with the audience

Katie – A good performance is also when the people on the stage are giving it their all.  When you can feel that and see that. When you can watch the performer feel what they are doing. Watching Connor Bennet on the Sax and see -it- in his body and the way the music moves through him. And thats just 1 guy with 1 instrument. Also, you know its a good performance when your legs don’t hurt from standing. When you don’t notice your tired legs – its a good show. It’s also a lot to do with the crowd, the venue,  a lot of things. But mostly the energy of the performer. As a performer you feel the energy from the crowd, it starts with you. It’s a conversation, and energy exchange back and forth from the crowd to the audience. If the audience is yawning its gonna feel shitty.

Jackson – We played Baltimore House a lot when we moved here. Grant kept booking us – it was really nice. We were surprised he asked us so often. It gave us an opportunity to grow and experiment and we ended up doing some pretty bizarre performances there. The bread balls, for example were so weird. Whoever didn’t have a vocal part stood on the side of the stage packing bread balls with different sugary things like jams. Then they were walking up and ceremoniously feeding the bread balls to people. People accepted them and some of them ate the balls. It was a crazy weird exchange. Now we play more at HAVN and they’ve  been so incredibly supportive of making whatever we want happen. They hosted our album release show and we have 2 different PA systems and stages. They bent over backwards to help us.

Katie – Those guys are the least jaded and most excited about art. They are a dream to work with!

Q – What’s it like moving to Hamilton as a group of musicians?
Jackson – I have found the music scene to be incredibly supportive and really amazing overall. So many amazing people who are excited about pretty left field stuff which is pretty special for a smallish scene. On the other hand with the music scene being small  – the experimental scene is really small. And so things like if theres two shows on the same night it splits the scene and then both are low attendance shows.  Theres a lack of spaces available / venues for experimental music I think. Overall the musicians and artists we’ve met have been incredibly welcoming.  I felt so moved by the amount of support and love from this group.

Katie – Its very hard to gauge attendance in Hamilton. We have no idea who will actually show up.  Moving to a new city is usually terrifying and hard. We came with a crew and the whole thing was pretty easy. We used to ride our bikes past HAVN and look in and stare at the cool people before we knew them. We were like ‘we’re into art and weird stuff’ and we had this space and met a lot of like minded people. Moving to Hamilton has shown us support and community like I haven’t seen before. It’s beautiful.

Q – What have you been listening to lately?
Jackson – Doomsquad, Tasseomancy, and the new Tribe Called Quest album.

Q – How are you feeling about your upcoming tour?
Jackson – Really Looking forward to it.

Katie – I’m bringing stuff to make smoothies and a massage ball. I dance with my whole body.. quite violently sometimes and my neck hurts after the show. So right now I’m trying to figure how who to give it my all without hurting myself.

Q – Do you guys smoke? Do you have to worry about maintaining your voices for back to back shows?
Jackson – Some of us smoke casually when we’re out. We’re not ‘smokers’. Luckily none of us are singers so we can do our job and still be able to yell or smoke all we want. Don’t worry. 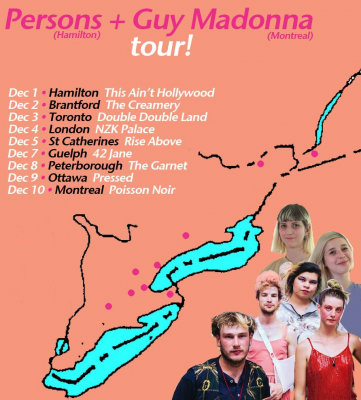