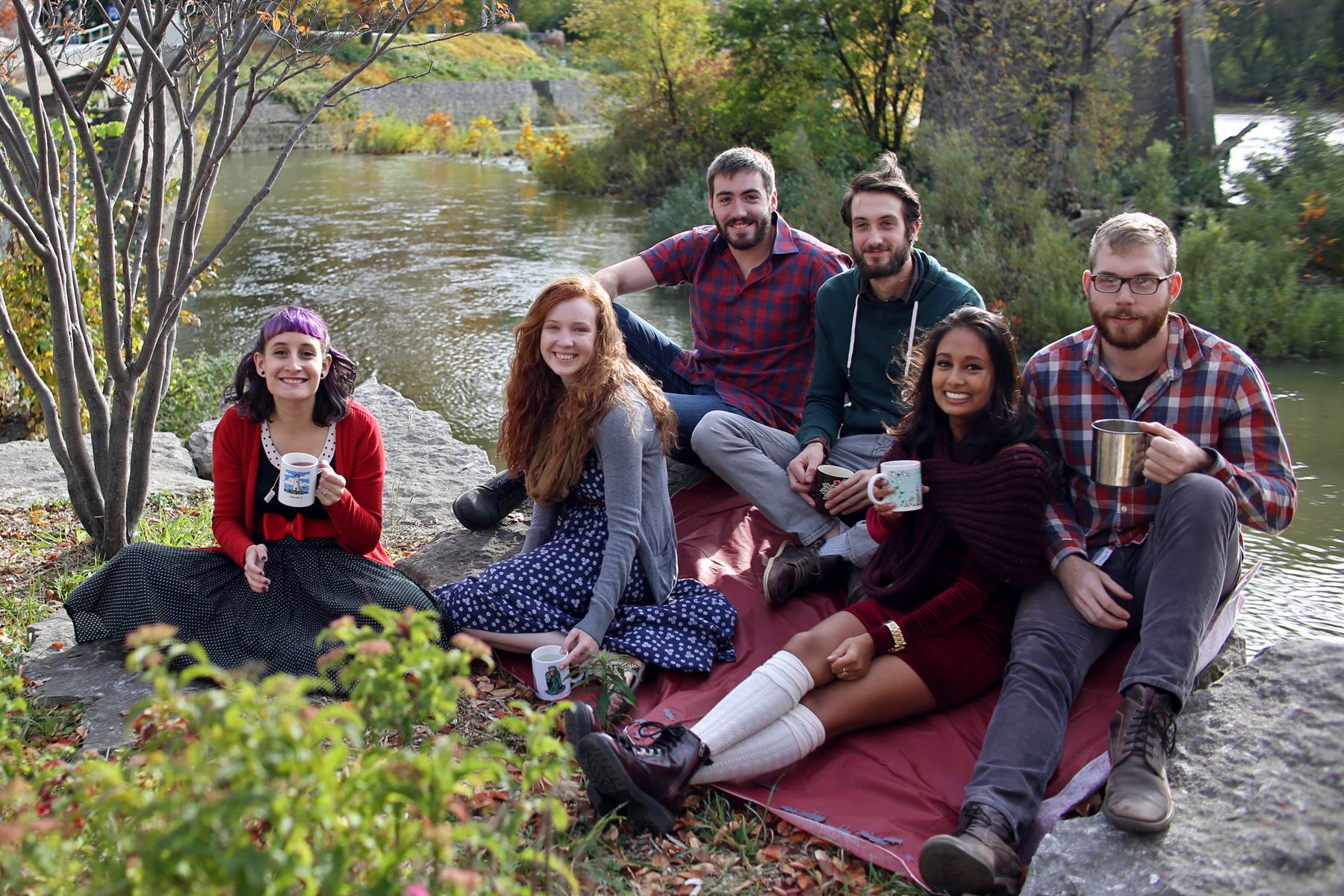 An Interview with Olivia and the Creepy Crawlies

London Ontario based pop/folk band Olivia and the Creepy Crawlies are playing in Hamilton soon and we thought it was a good time to get to know them a little better. The type of indie/folk/pop music that Olivia and the Creepy Crawlies play is best descried as: pretty. The music is whimsical, they use many quirky instruments, and the vocals are pretty and etherial. The band is made up of Olivia Borkosky, Kelly Samuel, Aurora Evans, Jordan Moore, Chris Denise, Connor Grieve. The interview below is with Olivia.

Q –  Congratulations on getting your album out! Can you tell us a bit about how it came together?
Thank you so much! This album came together a little differently than our last album. Since the majority of us are graduates of the Music Industry Arts program at Fanshawe, we had access to some really awesome gear and studio times, so we recorded the entirety of our first EP ourselves, both in the Fanshawe studios and in our guitarist’s basement. For this album, we enlisted the help of an amazing producer, Michael Borkosky, who also happens to be my dad, funnily enough. He has worked with some amazing Canadian artists like illScarlett and Alannah Myles, so it was really cool to have access to someone like him. He really helped us get the songs to where they are now, and recording with him was a really eye opening and cool experience for all of us. Having that external creative input from someone who’s been in the industry for his entire life was amazing. Going to a professional studio and working with a professional producer/engineer was just a natural “next-step” for us.

Q – I read that this album was supported through FACTOR grants – can you tell us a bit about how that came to be and what your experience was like, in terms of your creativity and working with this external force?
FACTOR was absolutely amazing for us. We wouldn’t have been able to make this album without their help. Working with FACTOR did mean that we had a definitive deadline to finish the album by, which was admittedly a little bit stressful at first, but it really pushed us. It didn’t really affect the creative process very much at all, because we started early and started making changes and doing all the “pre-production” early enough. Mike started coming to our practices and we all worked together to get the songs record-ready, so when we got into the studio it was really just a matter of nailing down our parts. We did end up writing a lot of our parts in the studio though. I feel like studios are magical places.. You never know what’s going to happen in that little room! All of a sudden, ideas can come to you that never occurred to you before. It’s really cool.

Q – Can you tell us how you decided to incorporate some of the quirkier instruments in your music? (The Ukulele, auto-harp, kazoo, etc)
When I (Olivia) started the band, I’d been doing the solo-acoustic thing for about 6 years, so for me it was time to start expanding and looking forward and starting a band was the natural progression. I actually met the majority of the band members in the MIA program, except Kelly who I’d met through some mutual friends, and knew that she had a phenomenal voice. I played solo throughout the entire first year of the program, and by the summer, I was ready to start the band. I waited it out until I had observed who really stood out in their respective crafts, and who I thought I would gel with, and I couldn’t be happier with the members I picked. Funnily enough, since ukulele is my main instrument, it was the basis that the band/songs were built upon. Our acoustic guitarist, Chris, is sort of an everyman, so any time we sat back and thought, “Hmm. This song is missing something, but we’re not sure what”, Chris would go, “Well I have an autoharp” or, “I have a banjo” or “I have a harmonica and also 8 arms”, and we would try it out and it would be just what the song needed. The kazoos happened really late one night at band practice. We were all a little loopy and thought it would be hilarious if we started a “kazoo-choir” type thing. We really only played them for one song but I’d love to bring them back.

Q – Having 6 members in your group, how do you manage everyones creative input and ideas?
Our songwriting process works like this: I write the music and lyrics on my ukulele, usually laying in my bed or inside a fort or something. Then I bring the new song to the band, and they all write their respective parts, usually right there at practice. We just jam out the song until it feels and sounds right to us. It’s really quite neat for me to see the song start out as a bare-bones acoustic track and then take on a life of it’s own and a whole new shape. We haven’t had a problem with creative differences yet, because we all think the same way and seem to gel really well creatively. In the band, everyone’s input is valid and although they like to jokingly call me the “Tyrant”, I give them creative free-reign with the songs I bring to them.

Q – What is your approach to songwriting? Do you write all the time? Do you write in project-specific bursts, etc?
I’m always writing! Even if it’s just one or two lines that I type out in the “notes” section of my iPhone. It’s a blessing and a curse! Sometimes I’ll wake up from a dream at 4am with a hook stuck in my head and I have to get out of bed and write it down or play it out. I find I write a lot more than usual when I’m going through periods of intense emotion, be it happiness, sadness, in love, etc. A lot of the songs that I write are directly from my own experience. On the flip side of that, I’m also very inspired by literature. For instance, “Gatsby”, the single off our EP, was inspired by the F. Scott Fitzgerald novel, The Great Gatsby, which just so happens to be my favorite book. If I read an amazing book, or watch a really cool movie, I’m instantly inspired to write. It’s really neat to write from the perspective of someone other than myself.

Q – What’s it like to be a band based out of London, On these days?
London has been so great to us. I can’t say it enough. The music scene here in London is thriving. There are a bunch of really great venues to play in, and there’s a real sense of camaraderie here that sometimes you don’t always get in local scenes. All the bands, no matter what genre they may be, are always helping each other out. We’re all really invested in each other’s success, and a lot of us are the best of pals, which is really cool.

Q – You guys are playing in Hamilton on the 20th.. do you listen to any of the music that comes out of here?
We love playing Hamilton! We’re playing at the Baltimore House which is a super cool venue. I love antiques, so the aesthetic there really appeals to me. Yeah! I really like The Arkells obviously, because who wouldn’t!? I think they’re a really wonderful and tight band. We also love the Vaudevillian. Their old-timey sound is amazing, and they’re a hoot to see live. So much talent. A good friend of ours, Wade Morrison is working under the moniker “Math Club” and he’s fantastic. If you like raw, beautiful, emotional songs with a touch (okay more than a touch) of angst, then check him out for sure. He’s coming out with a new album this year! Hamilton is full of so much talent, I know there’s a ton more I didn’t mention! You rock, Hamilton!