An Interview with Island People 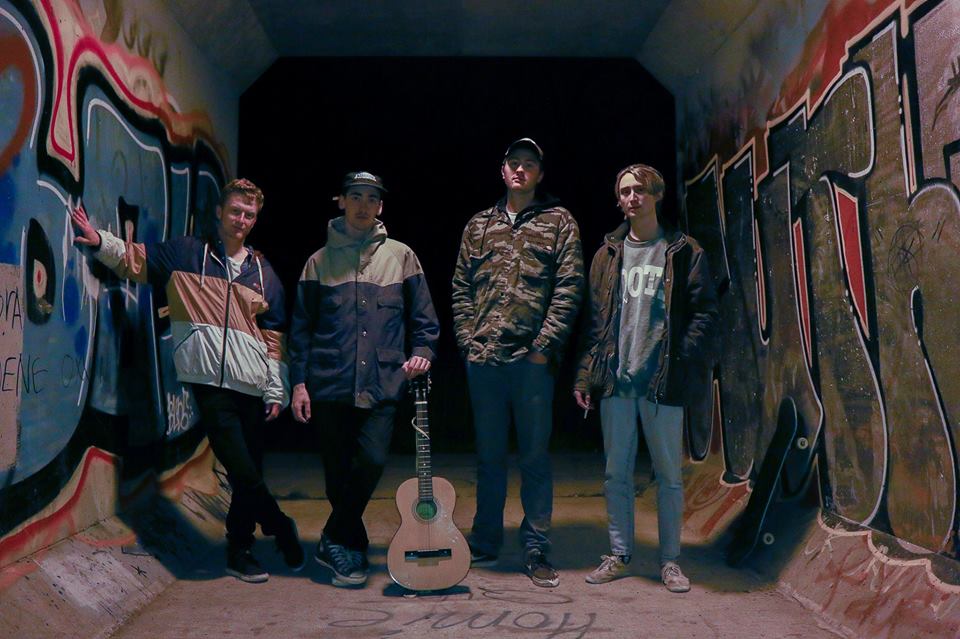 I met up with the guys from Island People at The Brain in Hamilton a few weeks ago. Island People (Kyle, Pat, Chris, and Andrew) are a band that’s existed for about a year; they recently changed their name from The Boogies.

I walked into the Brain and asked for a cider. The bartender quickly named two different ciders and without really hearing anything that she said I said “ok, that sounds great”. I still don’t really know what I ordered and paid for that day, but I will never forget the smell and the taste of this cider. I took a sip and quickly realized that I wanted nothing to do with this.  The taste and aroma of this beverage can only be described as bad breath bottled. Because I’m friends with the people who run The Brain I didn’t want to complain and send it back so the full pint stayed on the table for the duration of this interview with the Island People. It was like a giant smelly elephant in the room that I did not address.

After the interview was over one of the guys asked ‘what’s up with this full pint?’ and I explained how I got it and why I didn’t drink it. Being a bunch of hilarious 19-21 year olds the guys took turns tasting it and holding back the vomit until Pat stepped up and chugged the entire thing. A friendship was born.  The guys behind Island People are really friendly, hilarious, and passionate about playing music. They seem to be into it for all of the right reasons and I look forward to seeing what they contribute to the music scene.

Q – How do you guys know each other?
Kyle: We all grew up in and around Hamilton and a few of us went to school together.

Q – Why did you change your name from The Boogies to Island People?
Pat: We didn’t really like The Boogies and didn’t feel like it reflected our music. Boogie-rock?
Kyle: It sounded like Boogers, too. We thought about the new name for so long and eventually we liked Island People so we went with it.

Q – Can you tell us a bit about your album?
Kyle: We’ve been playing lots of these songs since April and there are a few new ones, too. We recorded the album with our friend Dan Edmonds at Pocket Shrine and then we took it to Boxcar.  The whole thing was a really cool experience.
Pat: We went analog – straight to tape and it was very cool. It felt like Christmas to sit back and watch these pros work on our songs.
Kyle: It was also a nice feeling of accomplishment to hear our music recorded. It was never a chore and the whole thing was so fun and such a great experience.

Q – Are you already planning your next album?
Kyle: Definitely. We’ve been impatient with getting this first one out. We want to play shows and promote it and work on our next album and hopefully have it out next year. Maybe we can try recording the next one ourselves.

Q – How did you guys settle on your rock sound?
Kyle: We never really worked on a specific sound, this is just how our music comes out. I write all of our songs and I’ve never really been able to write in any other way. Nothing else really worked. This is the music we make naturally.

Q – How would you describe your experience as a young band  in Hamilton in 2015?
Pat: It’s been good so far.
Kyle: You have to work really hard and prove yourself.
Pat: You have to hustle to get people to come out to your shows. Being really active on Social Media helps.

Q – Is it hard to get people to come out to shows?
Pat: It can be, yeah.
Kyle: For a while we played every weekend and our friends were getting tired of paying $10 constantly to hear us play. We understand that its hard and are trying to get cheaper shows.
Chris: A lot of the homies are broke and don’t want to pay the $5, or $10 cover.

Q – Where do you guys like to play?
All: This Ain’t Hollywood, and The Baltimore House!
Kyle: The Doors Pub is good, too. The sound system is shitty but the place is so small so the sound ends up being good no matter what.
Pat: The Doors is kind of like playing a house show. That place is fun.

Q – Do you guys play many house shows?
Kyle: We have a few times.
Pat: We loved playing the Eternal Summer show this past summer. That had a cool house show vibe.
Kyle: We’ve played at Uncle Jeff’s house.

Q – Wait. Who is uncle Jeff?
Kyle: My uncle Jeff. We practice at his house. His basement is our jam space, but he is moving out soon so I don’t know what will happen.
Chris: He might break up the band.
Kyle: He is moving in with his woman.
Chris: He is a great guy. Shoutouts to Uncle Jeff. He shreds.

Q – Is he like a silent member of the band?
Kyle: Pretty much. He is like the band’s father.
Pat: His neighbours like to party, too, so it has been a great place for us to jam. One time we were on his back deck really late on a Sunday and nobody complained. His neighbours came out with some beers and asked to chill with us. It was hilarious.
Kyle: It was weird..and fun. Maybe we can throw a going away party at Uncle Jeff’s before he leaves?

Q – If I know Uncle Jeff as well as I think I do – there will be a spot for you guys wherever he goes.
Kyle: No – he is moving in with his woman and there will be kids at the new place.
Chris: Let’s pray for the best.

Q – Who would you guys pay a lot of money to see live?
Chris: Tame Impala were really expensive and the show was worth every penny.
Kyle: I’d pay big money to see Neil.

Q – You’re on a first name basis with these guys?
Kyle: Yeah.. (laughs) we text.

Q – What makes for a good show, in your opinion?
Pat: If we’re having a good time. The audience can sense that and the whole show is better if we are into it. I always start laughing when I see our friends in the crowd – that definitely makes things easier.
Chris: Big shoutout to Jake Weiner who is always at our shows, dancing, having a good time. Jackson! I see you.

Q – Who do you like locally?
All: Great Machine, Redands, Raddleshack, The Alls, GoodAnya, Young Rival. Most of these people are our friends and we like to support each other.

Q – Is there a chance that Uncle Jeff, the legend, will be at your show at This Ain’t Hollywood?
All: Definitely.