Mother Tareka & The Rebel Funktion (formerly the Greezy Steez) are a nine piece wonder from Hamilton. They’ve been playing shows over the past year or two and they are finally releasing an album. The band, lead by MC Mother Tareka, have an explosive big band sound that is created by members of Haolin Munk, Altobeelays, a few other local musicians, and it is capped off by the wonderful DJ LP.

That’s a lot of people. We’re talking, MCs, big brass, string instruments, and vinyl. The big band creates a huge sound and this is definitely something to be experienced live. I was curious as to how this big sound would translate to a recording and with the release of the In The Key Of The So-Called Free EP any lingering question has been answered.

The EP is great and it is a great representation of Mother Tareka & The Rebel Funktion. Tarek’s sharp lyrics about police brutality, misogyny, environmental collapse, and other social injustices are fantastic. You will either agree, or disagree, with the politics Mother Tareka brings forth, and that’s fine. Hopefully these songs will make you think. Having said that, this album definitely is not what you would call preachy. Some ‘social justice’ inspired albums can be quite heavy on the message and no matter how valid the arguments are if something is preachy you will not want to listen to it. That is not the case with this album. The songs are great, the beats are heavy, the brass is mighty, and the lyrics just happen to be rooted in something real.

The album release party is happening April 19th at Homegrown Hamilton. You should go! 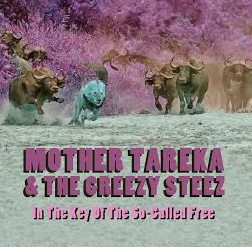 Mother Tareka & The Rebel Funktion are :